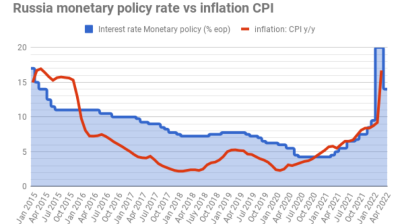 Russia's CBR makes a surprise 300bp cut to rates to 14% as the ruble soft-lands and inflation pressures moderate. / wiki
By bne IntelliNews April 29, 2022

The board of the Central Bank of Russia (CBR) cut the key monetary policy interest rate from 17% to 14% at the policy meeting of April 29 – the second cut in a month as inflationary pressure rapidly recedes.

It was expected that the regulator would cut the key rate, but the 300bp cut has exceeded market expectations.

The CBR made a surprise key interest rate cut to 17% on April 8, although the policy board meeting was not scheduled until April 29, as the regulator soft-landed the Russian ruble to the levels at which it traded before the military invasion of Ukraine.

As followed by bne IntelliNews, the military invasion of Ukraine forced the CBR to jack up the key interest rate to a record-high 20% to contain rapid ruble devaluation.

In March the regulator resolved to keep the key interest rate unchanged at a record-high 20% to contain the shock of extreme Western sanctions imposed after Russia invaded Ukraine at the end of February.

After spiking to around 20%, weekly inflation at the end of March moderated. The CBR attributed the key interest rate cut of 300bp to moderating inflation and noted that lower interest rates were needed to facilitate crediting. This was previously expected as double-digit interest rates drove funding into ruble deposits and choked crediting and mortgage loans.

Notably, the CBR’s front-loaded rate cut of 300bp corresponds to the mortgage rate cut previously urged by President Vladimir Putin, which shows closer co-operation between the Kremlin, the government and the CBR amid sanctions.

In the closely watched press release accompanying the rate cut the CBR changed its previous guidance for key rate "reduction at the next meetings" to seeing "room for reduction in case the situation develops in line with the baseline forecast", which could leave the CBR room to pause monetary easing at the next meeting of June 10, as the uncertainty remains high.

“In view of the introduced capital controls and the return of OFZ [federal ruble bonds] rates to mid-February levels, the CBR can afford bigger [rate-cutting] steps, as the market reaction to them will be smoother,” Renaissance Capital commented, seeing the decision as balanced.