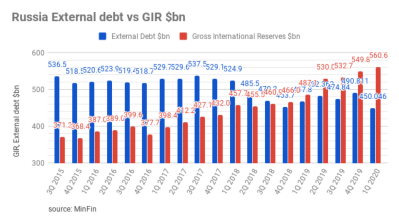 Unlike many other emerging markets Russia does not have a shortage of dollars, but is preparing a FX repo mechanism just in case it is needed.

Following the near disaster in 2014 where the government and companies very nearly ran out of foreign exchange, but time round everyone is better prepared. Caught out by margin calls in 2014 when the value of shares and bonds pledged as collateral on loans fell below pre-agreed levels, suddenly the borrowers had to come up with cash to cover the difference. That nearly bankrupted a few. So over the last six years companies have been paying down their debt so that they will not be caught with their trousers down in the event of another crisis.

“The situation with foreign currency liquidity is far from an emergency: if in 2014 the banks had a net investment position (foreign assets minus liabilities), then by the end of 2019 the banks were net lenders worth more than $ 80bn,” said Dmitry Dolgin, chief economist for Russia at ING, as cited by Reuters.

The CBR has just released its figures for Russia’s external debt as of April 1, 2020, which shows the level of debt is down again to $450bn. With reserves at $560.6bn as of the end of March, even after a crisis-related 7% drop in reserves, Russia still has $110bn more cash than it does debt.

It has been a central plank of Russian President Vladimir Putin’s policies since he took office in 2000 to reduce Russia’s indebtedness and hence remove any leverage any outside body might have on the Kremlin. It started with Russia paying off its IMF debt early and then followed with the London Club and Paris Club of commercial creditors. Most recently, the CBR sold off over $100bn of its US treasury bill holdings. At the same time the central bank has built up enormous reserves, about a third of which is in the form of solid gold ($119bn as of April 1).

And Russia has several safety mechanisms at work to cushion the blow from the oil price shock and stop-shock of the coronavirus (COVID-19) pandemic. CBR governor Elvira Nabiullina introduced a fully floating currency in the last crisis in 2014 and has been prepared to let the ruble tank in the worst of the crisis, which preserves the central bank’s precious store of foreign exchange.

At the same time the revolution in the financial markets that followed hooking Russia up to the Clearstream and Euroclear international settlement systems has pulled in some $40bn worth of foreign investors to the local Russian Ministry of Finance ruble-denominated OFZ treasury bill market.

As those investors bring dollars to buy a ruble-denominated bond the devaluation has also reduced the government's overall debt following revaluations, says Nabiullina. The local bond market was affected by the collapse of oil prices. Foreign investors sold more than $3.5bn worth of the Russian government bonds in March as the coronavirus caused unprecedented panic. Data from the Moscow Exchange shows non-residents reduced their holdings of OFZs by a record RUB284bn ($3.63bn) over the month - the largest ever divestment recorded in a single month and more than double the previous high of RUB141bn in June 2018. However, despite the broken records, the absolute amount that left was still relatively modest in comparison to the amount that stayed: foreign investors in Russia’s OFZ still account for c.31% of all the outstanding bonds, down from 35% a few months ago.

Investors did not, however, stay invested in the equity market, which saw a massive $1.2bn outflow over the first quarter, peaking with a record $1.4bn outflow in the third week of March alone. But with the worst of the selling over, what margin calls that would have come due have already done so without bankrupting any significant company or destabilising the market.

With only modest levels of debt to finance, the future repayments of Russian companies’ foreign currency debt will not have a noticeable effect on the ruble exchange rate, as was the case in the previous crisis, notes Sberbank as cited by Reuters.

“Gross payments by companies and banks in April (on external debt) are estimated at $4.4bn. Judging by the statements of the Central Bank, the share of intragroup payments there is low, but, according to their estimates, these companies have a sufficient supply of foreign currency liquidity, ” said Dolgin of ING Bank.

Nabiullina reassured at the start of April that there was plenty of liquidity on the market, something that is borne out by the low level of repo transactions. Repos are a short-term mechanism where banks can swap their bonds for cash at the CBR and are usually used for liquidity management, but in times of crisis banks also use them to borrow cash quickly. Repo volumes did dramatically spike over the weekend when the OPEC+ production cut deal collapsed on March 6 but the panic only lasted four days, after which calm returned.

The demand for dollars has skyrocketed around the world, especially amongst emerging markets that are struggling to come up with money to refinance their debt. In case these problems spill over into Russia Nabiullina promised to set up a new foreign exchange repo mechanism so that banks can quickly raise additional dollar resources should they need them, but analysts believe the mechanism is unlikely to be needed.

“The demand for additional foreign currency liquidity, if it suddenly arises, can be satisfied by the currency swap that the Central Bank offers daily in the foreign exchange market. If necessary, the central bank will also be ready to use the already tested instruments, especially repo auctions in foreign currency, ”Nabiullina said at a press conference at the start of April.

And Russia is flush with cash at the moment. Not only does it have massive amounts in reserves, it also had a very good first quarter, earing a $21.7bn current account surplus – higher than expected. What happens to Russia’s cash position going forward is anyone’s guess and will depend on where the price of oil settles and just how bad the global slowdown will be.

‘We’re barely afloat’ – Alarming comments by Ukrainian officials suggest problems for Kyiv in the Donbas, where Russian troops seek a ‘new Mariupol’
11 hours ago
EU’s credibility on the line over enlargement
1 day ago
Explainer | Why Tajikistan’s Pamiris don’t trust their government
1 day ago
Meet the latest Russian tycoon to be promoted to the Premier League
2 days ago
Ruble falls to below RUB60/$1, putting pressure on the Russian budget in 2022
2 days ago