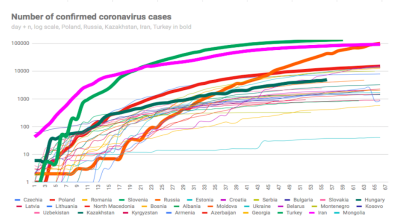 The total number of coronavirus (COVID-19) infections in Russia reached 299,941 as of the morning of May 19. Russia now has the second-highest tally of infections in the world after the US.

However there are positive signs that the number of new infections is slowing as newly confirmed cases in the last 24 hours stood at 9,263, falling below 10,000 for the fourth day in a row.

Prime Minister Mikhail Mishustin commented on May 19 that the growth in new coronavirus cases has halted, and 27 of Russia's 85 regions are ready to start gradually easing restrictions, local newswires reported.

"To date, judging by objective indices of day-by-day monitoring, a number of regions are ready to gradually ease the quarantine measures," Mishustin told an online meeting of the presidium of the coronavirus response council, according to Tass.

Mishustin also pointed to Russia’s record on testing: "Russia holds leading positions in terms of tests done. And we continue to extend the scope of such testing across the entire country to spot the infection at its initial stages and prevent serious complications," he said.

However, the Tayga.info news website threw doubt on the latest infection figures when it reported that the national coronavirus crisis centre has stopped updating the latest COVID-19 death counts in at least two Siberian regions, even though the regions have published new numbers.

Russia is also causing headaches for neighbouring states. Mongolia, which had so far managed to avoid isolated cases spreading, reported a total of 135 cases of coronavirus on May 17, with an additional 37 fresh cases of people returning from Russia, Montsame reported. The newly imposed lockdown in the Chinese city of Shulan is also linked to cases imported from Russia.

Elsewhere in Eastern Europe, Belarus and Ukraine have the next largest outbreaks in the wider Central, Southeast and Eastern Europe region after Russia, but there too, the daily increase in cases has not accelerated recently.

A new stage of easing lockdown measures introduced to curb the spread of the coronavirus (COVID-19) should be introduced in Ukraine every 10 days, Health Minister Maxim Stepanov has said.

Further west, Slovenia is the first country in Europe to announce an end to the COVID-19 epidemic, after a successful lockdown brought the number of new daily cases close to zero.

Other countries have also had a week or more of new cases at zero or in single figures, and lockdowns are being lifted.

The state of emergency in the Czech Republic, which was declared on March 12 to mitigate the coronavirus outbreak, ended at midnight on May 17.

Romania also downgraded its state of emergency to a state of alert — but after wrangling between politicians this only happened after a weekend during which there were no restrictions officially in place as lawmakers filed to pass them.

Highlighting the continued danger of new outbreaks even as the curve flattens, a refrigerator factory operated in Romana by Turkish group Arcelik had to shut down operations on the same day after dozens of its employees were found to be infected with coronavirus.

The region as a whole is counting the cost of the pandemic. Most Central and Southeast Europe economies contracted in Q1 but the region as a whole outperformed the eurozone average. Performance during the quarter ranged from a contraction of 5.4% quarter on quarter in Slovakia to growth of 0.3% q/q in Bulgaria and Romania.

Turkey is also struggling as domestic demand, tourism and exports have all taken a big hit from the arrival of the pandemic. Now economists expect yet another rate cut this week; responses from 15 economists surveyed by Reuters produced a median estimate of 50bp for the benchmark rate cut Turkey’s central bank is expected to announce on May 21.

The flattening of the curve extends across most of Central Asia and the Caucasus too. The exception is Tajikistan, the region’s poorest country, which until April 30 claimed to have no cases at all. Dushanbe has now reported a total of 1,322 cases as of May 18. Tajkistan now has 39 deaths linked to the virus, the highest number in the Central Asia region.

In Turkmenistan, which still insists it has no cases, the authorities have approved measures to prevent the spread of the virus, according to state media, RFE/RL reported. As well as the plan, titled "Turkmenistan’s preparedness to stand against the pandemic and ways to rapidly react to it”, the authoritarian President Gurbanguly Berdymukhamedov has approved restrictions on mass gatherings and a ban on swimming in the Caspian Sea in certain areas.