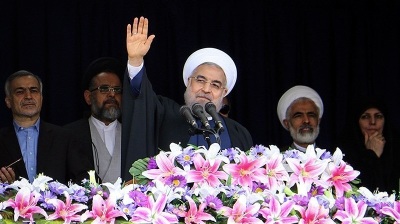 Rouhani is seeking wartime executive powers, arguing he needs them in the face of Washington's "economic war".
By bne IntelliNews May 21, 2019

All the talk right now is of whether Iran and the US could soon find themselves in a military confrontation, but when it comes to the unprecedented biting sanctions that have been raining down on Tehran from Washington for nearly a year Iranian President Hassan Rouhani has long argued that his country is experiencing an “economic war”.

That being the case, Rouhani late on May 20 said he was now seeking expanded, wartime executive powers to deal with the situation.

Rouhani pointed to Iran’s devastating war with Iraq from 1980-88 during which a Supreme Council of War was able to bypass other branches of government to make decisions on the economy and the war effort.

"We need such powers today," Rouhani was quoted as saying by Iran's official IRNA news agency.

An IMF GDP forecast for Iran released in April predicted a 6% contraction across 2019. But it was calculated before the US at the start of May launched an attempt to drive Iran's economically crucial oil exports down to zero. The next forecast might better show what an appalling economic situation Iran by now faces.

Rouhani also said that he favoured talks and diplomacy to reduce tensions with Washington but not under the current conditions produced by the approach of the Trump administration. "Today's situation is not suitable for talks and our choice is resistance only," he reportedly said.

Iran contends that the US is in breach of international law with its sanctions regime and broke the unwritten rules of diplomacy in unilaterally withdrawing from the multilateral 2015 nuclear deal in May last year.

The accord is still backed by Iran and five major power signatories, namely the UK, France, Germany, China and Russia—but in the face of the heavy secondary sanctions the US has threatened to impose on businesses and countries that pursue sanctionable trade and investment with Iran, the Islamic Republic is receiving little economic assistance from the fellow signatories.

The nuclear deal was drawn up to shield Iran from heavy sanctions in return for compliance with measures designed to stop it taking any potential path to the development of a nuclear weapon. All the remaining accord signatories and UN nuclear inspectors say Tehran has never breached the deal.

However, Donald Trump insists a stronger accord should be negotiated to curb not just Iran’s nuclear development programme but, among other things, what he says are its “malign” activities across Middle East conflict zones.