Iran’s Zarif attempts to cut Trump down to size with Alexander the Great, Genghis Khan comparison 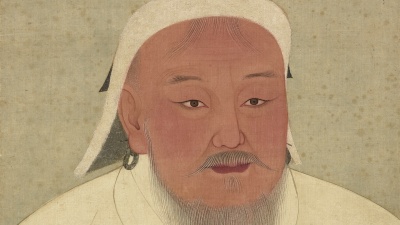 In the Middle East, and particularly in Iran, Genghis Khan is almost universally condemned as a destructive and genocidal warlord who caused enormous destruction to the population of these areas. Iran lived to tell the tale.
By bne IntelliNews May 20, 2019

Lock Alexander the Great, Genghis Khan and Donald Trump in a small room together and what kind of an interaction would you get? Okay, there are some things you’d rather not be urged to imagine, but that was the thought path Iranian Foreign Minister Mohammad Javad Zarif put some people on when on May 20 he responded to the US president’s "genocidal taunts".

Amid rising tensions in the Gulf, Trump tweeted on May 19: "If Iran wants to fight, that will be the official end of Iran."

Zarif, known as a witty and quick-fire big-hitter on Twitter responded by saying Trump should look to history. Trump, he said, "hopes to achieve what Alexander [the Great], Genghis [Khan] & other aggressors failed to do. Iranians have stood tall for millennia while aggressors all gone. #EconomicTerrorism & genocidal taunts won't 'end Iran'." He added. "#NeverThreatenAnIranian. Try respect—it works!"

Trump's tweeted warning to Iran was issued hours after a rocket was fired into the heavily fortified Green Zone in the Iraqi capital, Baghdad. It hit a building about 0.5km (0.3 miles) from the US embassy, but responsibility for the firing of the rocket was not ascertained.

In other comments on Twitter on May 20, Zarif said the US president was being "goaded" by what he refers to as the “B Team”—a reference to US National Security Advisor and long-time foreign policy hawk John Bolton, Israeli Prime Minister Benjamin Netanyahu and Saudi Crown Prince Mohammad bin Salman.

In other developments in the clash between Iran and the US, and the future of the nuclear deal that Trump walked out of in May last year in favour of using sanctions to try and force a tougher agreement, Iranian state media reported on May 20 that the country had increased by fourfold its production of low-enriched uranium. The stockpile was limited to 300 kilograms by the 2015 accord between Iran and six world powers. However, Behrouz Kamalvandi, spokesman for the Atomic Energy Organisation of Iran (AEOI), said Iran would "go beyond the 300kg limit in the not too distant future".

"If they want us to maintain this limit, it would be better for European countries to take the measures they want to implement as soon as possible," Kamalvandi added, referring to how Tehran has essentially told Europe that if in several weeks’ time some substantial measures to protect the Iranian economy from US sanctions have not been brought forward, Iran will move towards the nuclear deal exit door.

In potentially better news for those hoping the US and Iran resolve their differences without a shot fired in anger, the foreign minister of Oman, which brokered secret talks between the Obama administration and Iran prior to the open talks that led to the nuclear deal, visited Tehran to discuss regional issues with Zarif on May 20. Oman is unusual in that it has good relations with both Iran and the US.