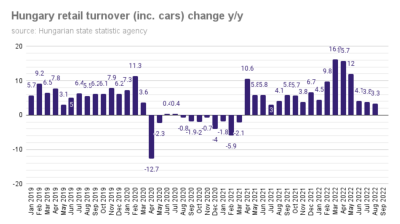 Retail sales growth in Hungary slowed to 3.3% y/y in August (chart), edging down from 3.8% in the previous month, the Central Statistics Office (KSH) said on October 6. Adjusted for calendar year effects, retail sales growth slowed to 2.4% from 4.3% during the period. Sales fell 0.1 m/m.

Retail sales growth has decelerated since April as households cut back spending after energy subsidies were scaled back and inflation rallied to a 24-year-high. Food inflation was even higher, putting more strain on consumers.

The increase in retail sales was almost entirely due to the strong demand for fuel, lifted by end-of-summer vacations. The government extended the HUF480 (€1.13) per litre price cap for private individuals until the end of the year. Sales of food retailers and declined on an annual basis for the third month in a row.

The volume of mail orders and internet retailing, accounting for 7.5% of all retail sales, fell 3.1% y/y in the last summer month.

Food sales accounted for 47% of the total, non-food sales for 35% and sales at petrol stations for 18%.

Rising energy bills and higher inflation will hit the purchasing power of consumers in the coming months, which does not bode well for economic growth, according to economists.

Data is pointing to a marked slowdown and Hungary may already be in a technical recession in the third and fourth quarters, according to ING Bank. The finance ministry forecast the economy to contract in the fourth quarter on a quarterly basis and remain in recession until Q3 2022.

ING revised its yearly average growth target for Hungary to 4.5%.