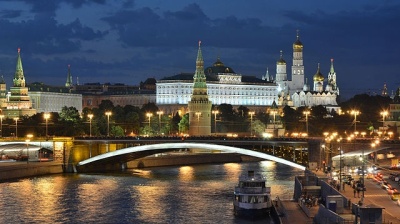 After three hours of talks in Moscow, German Chancellor Olaf Scholz and Russian President Vladimir Putin have made some headway, but differences remain. / Image: Andrey Korzun via Wiki Commons.
By bne IntelIiNews February 16, 2022

German Chancellor Olaf Scholz has said that there was still a diplomatic route to de-escalation on the Ukrainian border. “It is possible to find a solution,” the Chancellor stressed in a press conference on Tuesday. “We all need to be responsible,” he added.

After three hours of talks between the two heads of state, which Putin described as “useful and comprehensive”, Scholz warned Russia that an invasion of Ukraine would have “huge economic and strategic consequences”.

The two leaders announced that they had reached some agreements during their talks, including on removing short-range missiles either side of the Russian border and on possibly restoring accreditation to the journalists of Russia Today and Deutsche Welle.

But Putin was keen to stress that they still had their differences. “The proposals made by the USA and Nato do not satisfy us," he said, apparently referring to Nato’s refusal to discuss the principle of “indivisible security”.

Putin also announced that Russia considers that there is a genocide against Russian-speaking people in the Donbas, a claim for which he did not provide evidence.

Whereas Scholz seemed to be calling for some respite from tensions, Putin insisted that “we need to resolve this question now.” He reiterated Russia’s demand that Ukraine be permanently excluded from joining Nato, and reminded Scholz of the promise that Nato would not expand “one inch eastwards” made by US Secretary of State James Baker to the President of the USSR in 1990.

Scholz responded diplomatically by applauding the small-scale withdrawal of troops announced by Russia on Tuesday, 15 February, saying: “I fully agree, we have to find a peaceful resolution to this crisis. We heard today that several troops have been pulled back. This is a good sign, and we hope it will continue. We and our allies in the US and Nato are prepared to take steps for the improvement of our mutual interests, and Nato is prepared for bilateral negotiations.”

Russia’s defence ministry has announced that some Russian troops are being withdrawn from the border with Ukraine as their military drills have come to an end.

A spokesperson for the ministry, Igor Konashenkov, said on February 15 that soldiers had completed scheduled military exercises in the south-west of Russia, and would return home to their permanent posts. In contrast, he said that those who have travelled further, namely from Russia's central and Far Eastern bases, will remain where they are for the moment.

"As for drills that Russia conducts on its own territory and in accordance with its own plans – let me specially emphasise that again – they begin, are implemented and concluded as planned. We have repeatedly stated that," said Russia’s Foreign Minister Sergei Lavrov, accusing the Western allies of “information terrorism” over their predictions of an imminent Russian invasion.

On the same day, Russia’s State Duma backed a resolution calling for diplomatic recognition of Eastern Ukraine’s pro-Russian Donbas People’s Republics, that was delayed from a decision a day earlier.

The Russian parliament’s motion calls for Putin to formally recognise the Donetsk and Luhansk People’s Republics, both of which declared independence from Ukraine in 2014. No other country currently recognises the republics as sovereign states. The resolution is not binding, and Putin can amend or ignore it as he pleases.

If it did recognise Luhansk and Donetsk as independent, Russia would be the first country to do so. The decision gives Russia the option of treating the entire Donbas as an autonomous region under Russian influence.

“The implicit threat contained in the recognition of Donbas ‘republics’ lies in the fact that the ‘republics’ claim sovereignty over the entire Donetsk and Luhansk regions, including parts controlled by Ukraine – Mariupol, Kramatorsk, Sloviansk. It is a threat of war,” tweeted Russian journalist and Ukraine expert Leonid Ragozin

Russian presidential spokesman Dmitry Peskov commented that the Minsk II process will still take priority, leaving the door ajar for more diplomatic talks, but putting pressure on Ukraine to complete the Normandy Four talks that resumed at a meeting in Paris on January 27 after a two-year hiatus.

"It is no secret that this issue is very relevant in the public opinion; our people react very strongly to what is happening in Donbas, and they root for all the people living there,” Peskov said. But he also insisted on Russia’s commitments to the Minsk Agreement. "Russia has repeatedly declared its commitment to the Minsk Package of Measures and advocates the prompt implementation of the Minsk plan of action, in the exact order that is implied there," he said.

Taken together, the two events are a "carrot and stick" approach that is designed to show Scholz Russia is willing to co-operate but still has many dirty tricks up its sleeve should the negotiations not go well.

The place where the two leaders’ positions most closely dovetail is on the Nord Stream 2 gas pipeline, which both Russia and Germany want to see go into operation.

Putin emphasised the significance of Russia’s energy ties with Germany in a press conference on Tuesday, saying "Russia has been a reliable supplier of energy for a long time, for decades. Not once has the energy supply from Russia failed over all these decades."

“You ought to ask the Germans to open their wallets and see if they want to pay three, four, five times more for their gas,” Putin added, hinting at the low price of Russian gas relative to other sources.

Putin went on to praise the co-operation between the two nations in the construction of the Nord Stream 2 pipeline "German partners were granted access to production assets; we worked together in organising transport for supplies, our companies are working in the Federal Republic" said the Russian president.

"In terms of Europe, [Germany] is our largest, major trade and economic partner," Putin said. "Despite all the difficulties of the pandemic period, there was only a small adjustment of the trade turnover in the year before last, but it gained more than 36% last year," Putin noted.

Germany has long argued that Nord Stream 2 is a “commercial project” and so should not be subject to sanctions. The US has claimed that the pipeline is a geopolitical weapon and will reduce European energy security and so should be shut down if Russia attacks Ukraine.

Former Chancellor Angela Merkel was an advocate of the pipeline and managed to get US President Joe Biden to drop proposed sanctions on the pipeline, but those have come up again in the current crisis.

The pipeline, that runs under the Baltic Sea directly from Russia’s Yamal gas fields in the Arctic to the German coast, actually increases German energy security by bypassing Ukraine and avoiding the undeclared war zone. Its gas is also cheaper.

However, the new pipeline would allow Russia to cut Ukraine entirely out of the transit loop, costing Kyiv some $2bn in lost transit fees. In an effort to find a compromise, during her visit to Moscow last August, Merkel tried to persuade Russia to put at least part of its gas deliveries to western Europe through the Ukrainian pipeline. Putin said it had no objection, but Europe would have to increase the volume of gas it buys and sign off on new long-term contracts – something that Europe, which is transitioning to green energy as part of its Green Deal, is very reluctant to do.

The issue of Ukraine’s membership of Nato was also on the agenda, with Germany backing the international line that no country can be banned from aspiring to join. However, Scholz has already suggested that this is a non-issue from his perspective.

Scholz told journalists in Kyiv a day earlier that Ukraine’s Nato membership was “not on the table at the moment”, so it is “strange that Russia would raise the issue.”

This line is unlikely to satisfy the Kremlin, which is holding out for “legal guarantees that Ukraine will never join Nato, even at some distant point in the future.

Ukrainian Ambassador to the UK Vadym Prystaiko casued a stir on February 14 when he told the BBC that Ukraine is allegedly ready to consider abandoning Nato membership in order to avoid a war. However, Ukrainian Foreign Ministry spokesman Oleh Nikolenko insisted that his words were taken out of context.