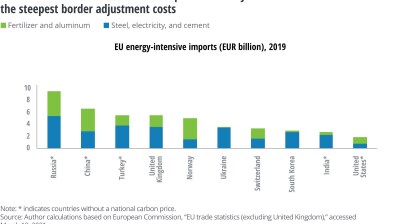 Countries without a carbon price will likely face steepest EU import costs. / Deloitte
By Richard Lockhart in Edinburgh May 22, 2021

The European Union unveiled its Green Deal in December 2019 with European Commission President Ursula von der Leyen referring to the plans as Europe’s “man on the moon moment”, stressing Brussels’ determination for Europe to become the world leader in reducing emissions and combating climate change.

The headline target is to reach net-zero emissions, alternatively called being climate neutral, by 2050.

The first step to achieving this is to increase the 2030 emissions reduction target to 55% of 1990 levels, up from the previous 40%.

This metric means that UNFCCC’s COP26 targets for restricting global warming to 1.5 degrees by 2050 should be met. The European Parliament passed these targets into law in April 2021.

All this would require €.8 trillion from the EU’s budget, with a further €1 trillion coming in private investment.

Put another way, for the EU to reach its goals set out in the deal, approximately €260bn per year of investment is going to be required.

While the central question is reducing emissions, the whole green deal package covers virtually all areas of the European economy.

This includes what the EU calls the circular economy, which involves boosting recycling and reducing raw material usage by industry. This will affect carbon-intensive industries such as steel, cement and textiles.

Efforts to decarbonise steel are a major focus, with Brussels wanting to fast-track clean steel made using hydrogen by 2030.

The Green Deal also covers a large number of parts of the sustainable economy, from housing to transport, biodiversity, construction, technology, agriculture, chemicals and methane.

The Green Deal also recognises that some post-industrial regions will suffer excessively. The Just Transition mechanism aims to provide extra funding to specific regions ad sectors, such as so-called rustbelt areas of Germany or Central Europe.

This would involve €100bn of EU cash, either from the existing regional budget or from the European Investment Bank (EIB), to fund a Just Transition. The EU even plans to bend state aid rules to allow public support such for green projects.

In terms of cleaner tech, the EU will also earmark 35% of its €100bn 2021-2027 research budget for climate-friendly technologies.

However, there is one weakness to this green deal. While the EU is setting some of the world’s most stringent emissions reductions targets, and enforcing them with such tools as the EU Emissions Trading System (ETS), European companies are exposing themselves to competitions from non-EU companies that neither have to pay for emissions credits, nor invest in reducing their CO2 output.

European Commission Executive Vice-President Frans Timmermans, who is in charge of the Green Deal, recently warned that the risk of carbon leakage "increases as the EU raises its climate ambition above that of its trading partners."

The Green Deal’s Carbon Border Adjustment Mechanism (CBAM) aims to avoid this by enforcing carbon tariffs that are equivalent to EU ETS carbon prices on imports of certain raw materials from "less climate-ambitious countries," which do not have carbon prices similar to EU levels, Timmermans said.

Russia, the US and Turkey’s polluting industrial sectors, such as steel and cement makers, do not have to meet emissions caps or buy EU ETS credits, currently priced at €50 per tonne.

This would mean that any emissions cut in the EU would in fact be exported, and total global emissions would not fall.

This could be done in two ways. Either the EU buys steel or cement form Russia or Turkey, with the emissions simply exported out of the EU, or EU steelmakers could relocate to neighbouring countries, with the same result.

The EU wants the CBAM, which should enter into force in 2023, to form the cornerstone of its climate and trade policies.

And herein lies the greatest threat to carbon emitters from the EU’s trading partners.

Put simply, the CBAM would extend the market prices of the EU’s ETS (generically called the carbon market) to the rest of the world by applying to imports a carbon levy that mirrors the price of carbon in the ETS.

This aims to prevent dirtier and/or cheaper imports of raw materials from arriving in Europe as the CBAM charge raises their price to comprisable EU levels.

The EU wants to include a wide range of imports, including cement, steel, aluminium, refined oil products, paper, glass, chemicals and fertilisers.

Russia and the US have been quick to voice their concerns about the CBAM ahead of the European Commission’s anticipated released of the CBAM plans by July 14, when it will publish a formal CBAM proposal and impact assessments.

John Kerry has called the CBAM a "last resort" and has urged the EU to wait until after the COP26 conference in Glasgow in November.

In trade terms, the CBAM could be seen as a trade barrier and be discriminatory by favouring EU emitters over similar companies outside Europe.

The Commission has insisted that the Green Deal will be WTO-compliant, which means imported goods cannot be held to higher standards than domestically produced ones.

The biggest exporter of carbon-embedded goods to the EU is Russia, with trade worth nearly €10bn in 2019, according to research from Deloitte. China is next with €7bn, then Turkey with €6bn.

Crucially, none of these countries has a carbon price at present, making them vulnerable to the CBAM, which would effectively act as a border tax.

Moscow has already accused the EU of instrumentalising the climate agenda for its own benefit, and has referred to the CBAM plans as protectionist.

Russia has made some climate change plans, though. It has piloted a carbon price in Sakhalin region.

And Rusal has unveiled plans to demerge its high-carbon aluminium smelters into a new company so that it can focus on the fast-growing market for green aluminium. Rusal owner EN+ has announced it would reduce its greenhouse gas (GHG) emissions by at least 35% by 2030 and reach net zero by 2050.

"The challenges in introducing a CBAM should not be underestimated" said Totis Kotsonis, international trade law expert at Pinsent Masons.

"First, there is the challenge of ensuring that the mechanism complies with the EU's WTO commitments, including the obligation not to discriminate between like products imported from different countries.  Equally, the CBAM cannot be based [for] the legal or de facto discrimination of imports when compared against domestic like products."

"Separately, there is the challenge of convincing major trade partners of the appropriateness of this approach. We have already had the new US administration expressing reservations about CBAM. There should be little doubt that China would also be opposed to its introduction," he said.

A key issue for polluting companies across the globe, but especially in Eastern Europe, Asia and even the US, is what sort of levels of carbon price the CBAM will produce.

Recent research from the Potsdam Institute for Climate Impact Research (PIK) warned that that the 55% emissions reduction target and the CBAM would push up the EU’s carbon prices to close to €130 per tonne by 2030.

“All things considered, the 55% target will have massive consequences for the power sector,” said the PIK’s Sebastian Osorio.

“Under the previous EU climate mitigation target – which meant reducing greenhouse gas emissions by 2030 by merely 40% – it was expected that the carbon price within the EU ETS would rise to €35 per tonne [of] CO2 until 2030. Yet by adhering to the new target of minus 55%, carbon prices in the ETS would in fact more than triple to roughly €130 per tonne [of] CO2 in 2030.”

As mentioned, the CBAM price is designed to be equivalent to the EU ETS price.

By comparison, China’s carbon tax currently stands at around €1-3 per tonne, way below current EU ETS levels of €50.

While EU companies and ultimately consumers already pay a carbon price, the EU plans to extend this price, as part of its comprehensive Green Deal.

The price may be trying to put a social cost on emissions, and indeed create an incentive for governments, companies and consumers to reduce these emissions, but the EU’s neighbours now face a major rise in their business costs that comes at a time when they are also trying to meet the Paris Agreement goals.

The price of carbon is no longer just an ESG issue, but a wider trade and investment issue that should be at the top of the agenda of decision-makers in governments across Eastern Europe and in companies exporting to the EU.

In a series of articles, bne IntelliNews will look at how different countries across Eastern Europe and Eurasia are exposed to the rising price of carbon in the EU, how governments and companies are making plans to cope with the new costs and how these new ESG issues are altering investment strategies.