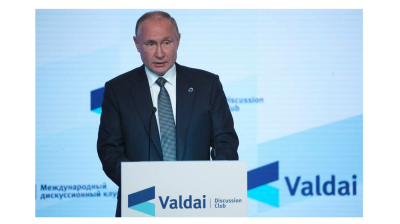 Putin railed against the US, accusing it of trying to maintain a hegemony over global politics in a speech that was designed to appeal to the non-aligned countries of the world to join Russia and China in defying the established western-led order. / bne IntelliNews
By bne IntelliNews October 28, 2022

"America has nothing to offer the world except domination." Russian President Vladimir Putin railed against the US and its allies in the West and called on the other countries in the non-aligned world to join Russia in building a new multipolar world during his annual speech to the Discussion Club on October 27.

The forum is an annual meeting with leading intellectuals from around the world that Putin often used to lay out long-term goals, and this year was no different.

The Russian president expounded many of his long-standing themes, but they were especially poignant this year, as he has launched a vicious war to subjugate Ukraine in an attempt to impose his vision for the world. The focus has been on Ukraine’s fight for survival but with his speech Putin made it clear he sees the fight as nothing less than a clash of civilisations that he entirely blames on the West and the US in particular.

Putin distinguished between liberalism and the American-style neoliberal model of the world order that “has nothing to offer the world but the preservation of its dominance.”

“[We are in a] doctrinal crisis of the neoliberal model of the American-style world order, they have no ideas for progress, they simply have nothing to offer the world, except to maintain their dominance," Putin said.

The president continued that "real democracy in a multipolar world first of all presupposes the possibility for any nation, any society and any civilisation to choose their own way, their own socio-political system. If the United States, the European Union countries have this right, then the Asian countries, the Islamic states, the monarchies of the Persian Gulf, the states of other continents certainly have it as well," Putin noted.

Putin has long since rejected all criticism of his illiberal system, which bne IntelliNews described as the Moscow Consensus, where the individual is expected to sacrifice some of their personal freedoms for the good of the state. This is another version of Putin’s famous “social contract”, where he promised not to interfere with the average man’s life if the average man does not interfere with politics.

This thinking has been behind some of Putin’s more aggressive moves. He equates foreign-funded NGOs as an attempt to subvert the people by importing and promoting Western political ideologies under the guise of “pro-democratic liberalism.” The government has passed laws to name and control foreign-funded NGOs, and more recently limit and name foreign funding in the media, which labels them “foreign agents”, and for Putin this is a literal description of how he sees them.

"Of course our country, Russia, also has this right [of choice of political system], and no one will ever be able to dictate to our people what kind of society and on what principles we should build," he told the Valdai delegates.

The speech was clearly aimed at the rest of the world, and especially the developing countries in the Global South that are also uncomfortable with the G7’s dominance of global geopolitics. With the invasion of Ukraine, Putin has definitively broken with the advanced economies of the world and is banking on the hope he can rebuild Russia’s economy in partnership with the other non-aligned countries of the world.

Putin has been building up to the war in Ukraine, but while the invasion in February was a surprise, the build-up was well telegraphed, starting with Russian Foreign Minister Sergei Lavrov's “new rules of the game” speech in February 2020, where he said that Russia would no longer tolerate the dual policy of trade and sanctions on Russia to “force” Western style policies on the Russian government. Lavrov threatened to break off diplomatic relations with the West if this policy continued.

Putin complained that all his attempts to work more closely with the West in the first two terms in office were met with rebuffs. Putin says Russia told the West: "Let's be friends, have dialogue and strengthen trust and peace." He complains: "We were completely sincere. What did we get in response? A 'no' on every possible area of co-operation."

There is some truth to this. Russia asked to join the EU shortly after Putin was elected but that idea was dismissed out of hand. Russian attempts to invest in EADS, the European plane-maker, were blocked, as was its attempts to buy the defunct Opel carmaker to use as a technological basis to rescue Russia’s own flagging automotive industry, amongst the better known examples.

In the last two years the Kremlin became increasingly strident, culminating in a list of demands issued by the Foreign Ministry in December last year that headed by a demand that the West give Russia a “legally binding” guarantee Ukraine would never join Nato.

"We have encountered a constantly increased pressure exerted upon us as well as the eruption of hotbeds near our borders," the president said in reply to a proposal that Russia mend its relations with the West. "What was the initial purpose of this pressure? Was it to get some training practice? The main aim was to make Russia vulnerable, turning it into a tool for achieving personal geopolitical targets.”

Putin shrugged off the extreme sanctions that have been imposed on Russia as a result of the war. The Russian economy has passed the peak of difficulties associated with the sanctions.

"There is still much to be done to create new import and export chains of supplies, reduce associated costs, but the peak of difficulties has been passed in broad terms. The Russian economy was adapted and will continue developing on a more stable, more sovereign platform," the President said.

Russia’s economy has done surprisingly well, as the Central Bank of Russia (CBR) reported in its latest macroeconomic survey predicting a mild 3.5% contraction for this year.

Putin’s appeal to the non-aligned world to join in the Russia-China camp that stands in opposition to the US-led bloc will have limited appeal. While many developing countries have some sympathy for Russia’s point of view and share concerns about the US grip on geopolitics, the UN voting to condemn Russian aggression shows that most of these countries want to remain on the fence in order not to bring down sanctions on themselves.