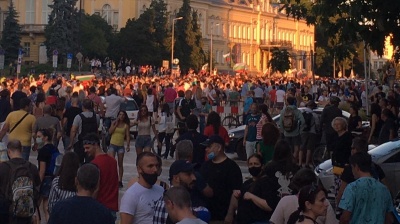 Tens of thousands gathered in Sofia to demand the resignation of Prime Minister Boyko Borissov and chief prosecutor Ivan Gechev, accusing them of corruption and dependence on criminal groups. / Yana Mitseva
By Denitsa Koseva in Sofia July 11, 2020

Clashes between police and protesters and numerous arrests marked the second day of mass protests in Bulgaria, which are backed by President Rumen Radev. Protesters demanded the resignation of Prime Minister Boyko Borissov and chief prosecutor Ivan Gechev, accusing them of corruption and dependence on criminal groups.

The protest came in response to a raid on the president’s offices on July 9 when the prosecution arrested two of Radev's advisors. Many saw this move as an attempt to silence Radev the day after he insisted on an investigation into state security services employees who were sent to guard the villa of controversial politician Ahmed Dogan.

Tens of thousands of people gathered in the second day of protests in Sofia on July 10 to defend the presidency from attack by the prosecution, which protesters and opposition claimed was an attack against Bulgarian statehood as personalised by the presidential institution. 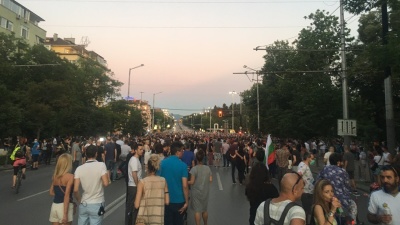 Protesters reported cases of excessive police violence and shared videos showing policemen kicking arrested people lying on the ground. A number of protesters were arrested but there was no official information on how many or the reasons for the arrests.

In the second day, the protest gathered significantly more people and Radev again went out and talked to them.

“I am glad we are together again because the protest against the mafia in authorities will turn into a campaign,” Radev said.

He added that the mistakes from the mass protests in 2013 — which lost momentum as people split into political factions — will not be repeated.

“We are not here because we are the same. We are here to defend our freedom. To be ourselves, we first must be free,” Radev said.

Protesters applauded him loudly and Radev even came out of the presidency for the second time after being called by the people. His popularity, which has always been high, sharply jumped after Geshev decided to order raids of his offices and arrest of two of his advisors on suspicion of influence peddling.

A joke is going around on social media that Geshev should become Radev’s PR as he is doing a very good job of lifting the president’s popularity with his actions.

Meanwhile, chats among members of the ruling Gerb party were leaked on Facebook, showing how they were organising a rival protest in defence of the government – a practice commonly used by Gerb during its 10 years in the power. The chats showed that Gerb’s organisers sent orders demanding that a specific number of people be sent in Sofia from each town, including Gerb members of local governments.

The rival protest also gathered a crowd, with a few participants admitting having been paid by the organisers. This led to tensions and at one moment protesters defending Radev attempted to prevent busses full of Gerb supporters from reaching their destination and yelled at the participants calling them traitors. There were reports of people throwing bottles of water and eggs at the busses with Gerb members but the police quickly restored order and separated the two groups.

At the rival protest, Borissov accused Radev of staging the whole situation and working together with the non-parliamentary opposition Democratic Bulgaria, as well as other opposition parties. Borissov ordered his ministers to address the party’s supporters, pointing out that the government marked the biggest success for Bulgaria in years on July 10 – accession to the Exchange Rate Mechanism (ERM2). Moreover, Borissov accused all those protesting against him of envying this success and trying to steal the joy of what should be a day of celebration.

Both Borissov and Geshev claim the anti-government protests are managed with the aim of destabilising the country but their accusations provoked more anger than support.

“In the coming days, the mafia will sow discord, denigrate the leaders of the protest, claim that you are paid, stage fake contra-protests and provocations. But let them know one thing: paid protests are there where the busses are. I want to ask you one very important thing: do not be aggressive to our brothers and sisters who are from the other side. They are there out of force and fear. Let’s help them free themselves from the fear and compulsion. I am persuaded they soon will do that,” Radev said.

Earlier on July 10, Geshev accused Radev of putting unprecedented political and partisan pressure on the prosecution, claiming that he is independent and is chasing all oligarchs aiming to send them to jail. Geshev’s statements are not new but the majority of Bulgarians consider his actions biased and aimed only at those in opposition. Moreover, Geshev has become notorious with action movie-style arrests of independent businessmen or businessmen who have lost the protection of the government.

Lawyers in Bulgaria said they are demanding the resignation of Geshev and of Justice Minister Danail Kirilov and are planning to stage a protest due to their recent actions and statements that harmed the prestige of magistrates in the country. They claim that Geshev abused the constitution by entering the presidency in an unprecedented way, proving he is serving the interests of Radev’s opposition, not of justice.

“[W]e, being magistrates, and Bulgarian citizens, call on Mr. Geshev to resign immediately as chief prosecutor of Bulgaria, because, as of yesterday [July 9], he does not have the moral right to take this position. He also does not have the necessary legitimacy, because a person who has abused so rudely the constitution and the rule of law in the country cannot be the face of the institution that should guarantee their respect,” the Supreme Bar Council said in a statement.

Kyrgyzstan: Eccentric health minister fights for his job amid claims of corruption and bullying
2 hours ago
Azov commanders have remained behind in the Mariupol steelworks to continue the fight
3 hours ago
Russia hopes Chinese carmakers will help revive Moskvitch brand
3 hours ago
Russia may leave the WTO and WHO. In practice, it never really joined
3 hours ago
UN special rapporteur issues damning indictment on human cost of sanctions in Iran
8 hours ago