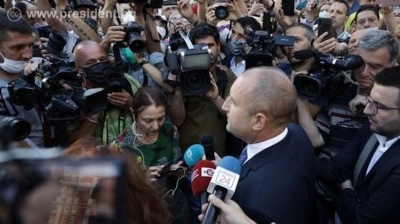 Bulgarian President Radev spoke out in support of anti-government protesters who gathered on July 9. / president.bg
By Denitsa Koseva in Sofia July 9, 2020

Bulgaria’s President Rumen Radev gave his support to thousands of people who gathered spontaneously on July 9 to demand the resignation of the government and the chief prosecutor, accusing them of being completely dependent on corrupt businessmen dubbed the “mutri” or mafia.

The protest came in response to a raid on the president’s offices earlier the same day when the prosecution arrested two of Radev's advisors. Many saw this move as an attempt to silence Radev the day after he insisted on an investigation into state security services employees who were sent to guard the villa of controversial politician Ahmed Dogan.

“It depends on all of us to oust the mafia from the executive authorities. To oust the mafia from the prosecution, which is used by the mafia in the most ruthless way for its shield and for political repressions. The Bulgarian mafia is ruthless because we have endured it for a very long time, because we were spectators of our own lives for too long, because we have endured the lies from the screen for too long,” Radev told protesters, who had also gathered to defend the institution of the presidency.

“No to fear! We shall gain Bulgaria back! Mutri out,” said Radev.

The protest gathered supporters of almost all opposition parties with different political views but with the common goal of restoring the rule of law in the country, which is the most corrupt EU member according to watchdog Transparency International and has not made any progress in the fight against top level corruption so far.

“The Bulgarian mafia achieved the impossible — to unite honest people against itself,” Radev said.

The protesters also gathered in front of the government building and the prosecution to demand the resignation of Prime Minister Boyko Borissov's government and chief prosecutor Ivan Geshev.

Geshev, who was appointed after a highly controversial procedure at the end of 2019, has become notorious for action-movie style raids and arrests of people who oppose those in power. The July 9 operation at the president’s offices was no exception.

Geshev had previously made several attempts to discredit Radev, but so far without success.

Radev, a former air force commander, remains the politician with the highest rating in the country with at least 50% support since taking office. There have been rumours that he might set up his own political project but Radev has not confirmed them so far.

“Now is the time to unite despite our political beliefs and positions — in defence of democracy, freedom, rule of law and the independence of the courts, which is ours, not the property of the mafia,” the Justice for All civic organisation said in a statement.

“I protest because I do not want the mafia and its inquisition to steal the future of our children! I shall continue protesting not only until the resignation of Borissov and Geshev, but for calling of a round table for the restoration of the law followed by an election,” Yavor Djonev, founder of one of Bulgaria's largest IT companies Sirma Group, wrote on Facebook.

The protest ended peacefully in the evening but with calls to continue on July 10 despite a ban on gatherings of more than 30 people imposed by the government as part of measures aimed at containing the spread of coronavirus (COVID-19).