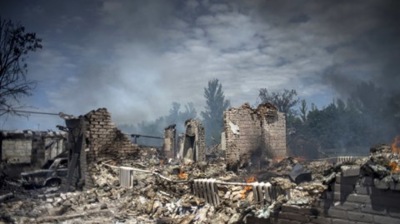 Putin escalated the war in Ukraine by announcing a partial mobilisation amid a successful Ukrainian counter-offensive. / bne IntelliNews
By bne IntelliNews September 22, 2022

Rallies against the partial mobilisation announced by Russian President Vladimir Putin on September 21 took place in 38 Russian cities, according to Kommersant, with over 1,300 people detained, including 490 in St Petersburg, 468 in Moscow and 40 in Yekaterinburg.

Putin escalated the war in Ukraine by announcing partial mobilisation amid a successful Ukrainian counter-offensive that swept Russian forces out of the Kharkiv region and retook villages in the Luhansk region, which had been fully occupied by Russia.

While Putin called the mobilisation “partial” and the Ministry of Defence clarified that about 300,000 people are ready for a military call up, lawyers surveyed by The Bell and Meduza warned that the law spearheaded to regulate the emergency draft is phrased in broad terms and allows for indiscriminate military recruitment.

Those eligible for the draft can also be banned from leaving their respective Russian regions. Draft dodging during the period of "mobilisation or martial law" is now punishable by five to 10 years in prison.

Spokeswoman of the Russian interior ministry Irina Volk described the rallies as unsanctioned and gathering an "extremely insignificant number of participants", as cited by Kommersant.

bne IntelliNews covered how shortly after the military invasion of Ukraine in February a barrage of repressive laws tightened the Kremlin's grip on the media landscape and penalised public protest.

But the amendments regulating the call-up, passed swiftly prior to Putin’s speech, toughen the penalties for protests even more. One known criminal case has been reported, while videos of unconscious protesters being carried away by riot police circulated on social media.

In less than a day after Putin’s announcement, the prices of flights for the few remaining visa-free destinations such as Dubai, Yerevan, Astana and Istanbul have soared 10-15 fold and have been sold out, according to reports by Kommersant and Vedomosti dailies.

Sources in booking agencies told Kommersant that the demand for urgent departures to Kazakhstan, Armenia, Turkey, Uzbekistan and the United Arab Emirates, previously the go-to destinations for post-invasion Russian expats, have jumped at least three-fold.

On September 21 the cost of Moscow-Yerevan tickets reached $2,400. For this Saturday, the price of a ticket reaches approximately $4,800. Before Vladimer Putin's announcement the price was less than $200.

Serbian media reported the arrival of a large group of Russians in Belgrade, with some telling Nova.rs they were fleeing to avoid mobilisation. Tickets on Moscow-Belgrade flights are reportedly changing hands for several thousand euros.

In the meantime, after weeks of deliberations Finland is now rushing to shut its border to Russian tourists holding Schengen visas. This would make it the last EU state sharing a land border with Russia to do so, following the previous decisions by Poland, Lithuania, Latvia and Estonia. Latvian authorities have already stated that no exceptions will be made for Russian draft dodgers.

"Today we decided to start preparing a national decision on how we can limit or completely prevent this tourist flow, and this national decision could include a new law to be made very quickly, or an interpretation of existing rules," Foreign Minister Pekka Haavisto said on September 21.

"Finland does not want to be a transit country, even for Russians with Schengen visas issued by other countries, and now we want to take control of this traffic," he said.