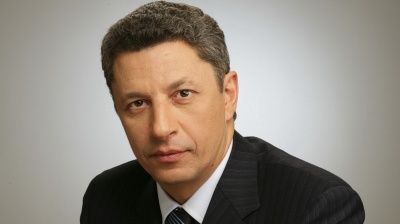 If Ukrainians living in Russia had been allowed to vote in the presidential election then first round winner Volodymyr Zelenskiy might be facing pro-Russian Yuriy Boyko in the second round.
By Ben Aris in Berlin April 5, 2019

The official full results for the first round of Ukraine’s presidential election are in. As is well known by now, outsider and comic Volodymyr Zelenskiy won a decisive victory, making him favourite to win the second round and take the presidency on April 21. But the surprise is that the showman came very close to a face-off with one of the pro-Russian candidates rather than the incumbent President Petro Poroshenko.

Zelenskiy won 20 of Ukraine’s 25 oblasts, which was unexpected as it was anticipated that Poroshenko would do better than he did in Ukraine’s heartland. The outsider also overwhelmingly won when it came to votes cast in Ukraine polling stations abroad located where Ukrainians have gone for work, such as in Warsaw and Prague. Poroshenko won overseas in those countries where better-off Ukrainians have gone to live, such as in London. 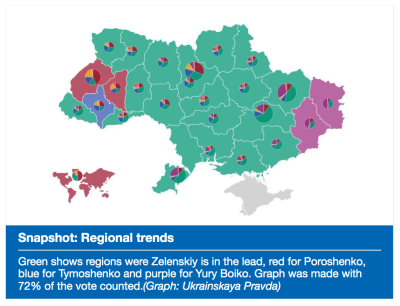 In general, voting was split more along generational lines than geographic lines with the young overwhelmingly supporting the comic, versus the middle-aged who supported Poroshenko. Students voted for the comedian en masse.

But the big surprise was the strong showing for the pro-Russian candidates. The Russian-oriented Yuriy Boyko won the vote in the easternmost regions of Donetsk and Luhansk, while the pro-Nato Poroshenko won the traditionally pro-Western regions of Lviv and Ternopil.

Poroshenko has campaigned on a platform of “Army, Language, Faith”. He has tried to whip up nationalist sentiment, selling himself as a wartime leader and the only one that can keep the Russian wolf at bay.

But it appears that he missed the mood of the country at a time that he has been dogged by numerous corruption scandals that have implicated him personally, including the “Ukrainian Papers” scandal, as lately reported by bne IntelliNews’s award-winning investigative reporter Graham Stack.

While the attacks on Ukraine by Russia – in terms of the annexation of the Crimea, the Russian regular forces that are supporting the separatists in the Donbas and the naval clash in the Kerch Strait last November – have contributed to a sense of national Ukrainian identity that was somewhat vague before, that has to be set against one thousand years of history and culture shared by Ukraine and Russia as well as significant economic ties that persist to this day: Russia remains, despite the undeclared war, Ukraine’s biggest investor and trade partner.

Indeed, while Poroshenko has played on the fears of a Russian invasion, Zelenskiy has avoided taking an excessively anti-Russian line in public. That has opened him up to accusations of being “pro-Russian” levelled by Ukrainian nationalists, but the average Ukrainian takes a more conciliatory line, according to a recent poll.

Ukrainians are becoming less likely to look negatively upon their Russian counterparts according to a joint survey conducted by an independent Russian pollster, the Levada Center in Moscow, and the well-respected Kyiv International Institute of Sociology (KIIS). The survey was carried out in February. It took opinions from 1,600 people in Russia and 2,042 in Ukraine.

Feelings toward governments, however, are a lot more divisive. Ukrainians largely remain very negative when it comes to Vladimir Putin: 69% view the Russian president and his government as bad or very bad, while 85% of Russians expressed a negative attitude to the Poroshenko administration, according to the poll.

Other polls have found that most Ukrainians are more concerned with securing a government that can improve living standards as well as end the conflict in Donbas, whereas the annexation of Crimea was bottom of the list of worries. It worried only 4% of respondents, according to the last poll conducted by the International Republican Institute (IRI), which is funded by the US government. Poroshenko himself has been blamed personally for many of the problems with trust in the government at a global low of only 9% and between 70%-80% of respondents believing that the country is going in the “wrong direction” according to various polls.

All this has made voters more receptive to the pro-Russian candidates’ message. It at least promises peace.

“Among the most overlooked themes of these elections is the strong Russian-oriented vote. Had the Russian-oriented electorate rallied around a single candidate (rather than being split between the factions of Yuriy Boyko and Oleksandr Vilkul, a former vice prime minister), that candidate would have earned 3mn votes and would have finished in third place, just 24,318 votes short of Poroshenko’s result,” Zenon Zawada of Concorde Capital wrote in a note.

More controversial is the fact that the 3mn Ukrainians living in Russia – who form the country’s biggest expat population – were unable to participate in the election as the Ukraine embassy and consulates didn't host polling stations for “security reasons.” Some commentators have speculated that this was an example of Poroshenko using “administrative resources” to bolster his chances in the vote and that had these Russia-based Ukrainians voted Zelenskiy would be facing Boyko in the run-off, not Poroshenko.

Whoever, wins the second round of the election – and Zelenskiy remains the clear favourite – the strong showing by the pro-Russian camp in the race will bolster their appeal in the almost as important October parliamentary elections. While the pro-Russian forces will almost certainly end up in the opposition, if they can unite they will be a powerful force that will at least try and shape more moderate relations with Russia in contrast to the aggressive confrontational style that Poroshenko has been pursuing.

“We have long expected a strong Russian-oriented vote in the October parliamentary elections, but it will be even stronger if these two factions (torn by a rivalry between oligarchs Rinat Akhmetov and Dmytro Firtash) find a way to unite into a single party (like the Party of Regions [of former president Viktor Yanukovych] was),” Zawada added.

Should he win, it remains to be seen how Zelenskiy, as a new and inexperienced president, would cope with a rambunctious and sharply divided Rada.

The analysts at Concorde Capital see a Zelenskiy-win in the second round as highly likely. “We can say with confidence that nearly half of Tymoshenko’s 2.5mn votes will go to Zelenskiy, as well as most of Boyko’s 2.2mn votes. On top of that, the pro-NATO Poroshenko will get only a thin slice of the 1.3mn votes earned by the pro-NATO Grytsenko, who maintains his firm opposition to the president because of his ‘five years of lies, corruption and plundering’, as he alleged this morning,” Zawada added.

All of these factors make Zelenskiy the easy favourite in the run-off, scheduled for April 21. The election is now seen as “his to lose”.

But having said that, no one is writing off Poroshenko who has all the resources of the state at his disposal as well as control of several TV stations; when he took office and promised to put his business assets in a trust he explicitly excluded his ownership of Channel 5, which remains under his direct control along with two other stations directly and three more indirectly.

“[Poroshenko] may be able to strike fear into enough Ukrainians that the Russians will take over if he’s gone, but so far that strategy isn’t working,” Zawada said.