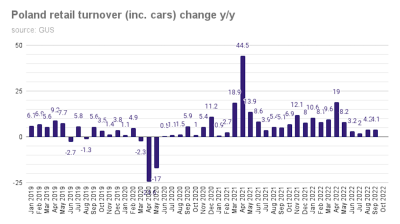 The September reading arrived roughly in line with the consensus forecast for an expansion of 4.2% y/y and once again was driven by sales of basics like food, pharmaceuticals and cosmetics, as well as – presumably in preparation for winter – shoes and clothing.

Overall, sales in these categories are being sustained by Ukrainian refugees, analysts say. Elsewhere, sales of durable goods waned, as consumers are growing wary of “important purchases,” as indicated by consumer sentiment surveys.

“The decline in real household incomes and the worsening sentiment mean there are several tough quarters ahead [of the retail sales segment],” bank PKO BP said in a comment.

“Starting from March 2023, y/y dynamics will be cleared of the effect of the influx of refugees and will most likely decline significantly,” PKO BP added.

That will only worsen the broader economic outlook for Poland, where consumption has long been a key driver of growth.

Following the inflation-boosting outbreak of the war in Ukraine, the National Bank of Poland hiked its reference interest rate from 0.1% to 6.75% to contain inordinate price growth. That is expected to dampen economic activity in the remainder of 2022.

Sales of textiles, clothing and shoes grew 25.2% y/y in the ninth month, the breakdown of GUS data showed. Turnover in the pharmaceuticals and cosmetics segment increased by 11.1% y/y, while food sales grew 7.8% y/y.