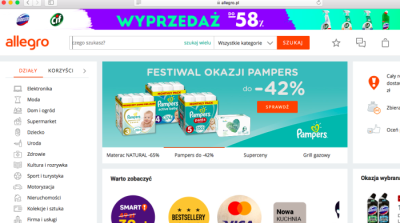 The owners of Poland’s top online retailer and auction portal Allegro – the private equity funds Cinven, Permira, and Mid Europa Partners – are working towards listing the portal on the Warsaw Stock Exchange in October, PAP reported on August 12.

The report comes one month after a Reuters’ report, which said the IPO would take place in September. The potential IPO could be worth $2.3bn-3bn (€2bn-2.6bn), which would put Allegro’s valuation at some $11bn.

“The public offering and the debut of Allegro on the Warsaw stock exchange are planned for October this year," PAP reported, citing an anonymous source “familiar with the process”.

If successful, Allegro’s listing would be the biggest IPO on the WSE since the 2010 debut of the state-controlled insurance company PZU, which raised PLN8.1bn (€2.1bn at then exchange rates).

Cinven, Permira and Mid Europa acquired Allegro for $3.25bn in 2016. An estimated 79% of Polish consumers use Allegro for online shopping.

Late last year, Poland’s market watchdog UOKiK ruled that Allegro abused its dominant market position in order to favour its own store over other sellers on the platform.