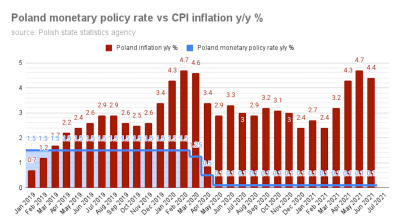 The reading confirms the flash estimate, which GUS published earlier this month. Despite the growth rate easing from the May peak – which was the highest inflation reading since February last year - the June expansion extends the period of ongoing high inflationary pressure in Poland.

Moreover, the slowdown could end soon, according to some analysts.

“At the end of the year, inflation should rise from the current 4.4% pace to around 4.9%. The November [inflation] projection from the National Bank of Poland [NBP] will likely be crucial for the interest rate path in Poland,” ING wrote in a comment on GUS figures.

“The risk of intensification of inflationary processes is particularly strong during the summer holidays when there will be a combination of a surge in demand for services, increases in administered prices, such as water tariffs, and rising food prices,” the state-controlled bank PKO BP said.

For now, however, the NBP keeps repeating that any changes to Poland’s currently super-dovish monetary policy are unlikely until it is clear that the post-pandemic economic recovery takes a firm hold.

In June, the increase of the headline index was once again driven by a jump of 16.5% y/y in the transport segment even though that marked an easing of 3pp versus May. That owed to ballooning fuel prices, which jumped 27.3% y/y in the sixth month.

Growth in the food and non-alcoholic segment picked up to 2% y/y in June, compared to an expansion of 1.7% y/y in May. Housing prices, including prices of energy, accelerated growth to 5.9% y/y in June after growing 3% y/y in May.

Of other significantly weighted categories, prices of alcoholic drinks and tobacco products added 1.7% y/y in June, 0.1pp below the annual reading from the preceding month.

In monthly terms, CPI expanded 0.1% in June, easing the growth rate versus an expansion of 0.3% m/m in May.