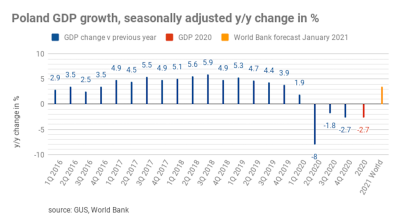 Polish GDP fell a seasonally adjusted 2.7% y/y in the fourth quarter after retreating 1.8% y/y in July-September, a revised estimate released by the Central Statistical Office (GUS) on February 26 showed.

The reading is an upward revision of 0.1pp versus the flash estimate published in mid-February. Although deeper than in Q3, the contraction in October-December shows Poland’s economy in much less trouble than after the shock of the spring lockdown.

Still, “GDP growth structure [in the fourth quarter] reflected the re-introduction of lockdown measures and overall increased uncertainty in the economy, that weighed on private consumption and investments,” Erste noted.

In unadjusted terms, Poland’s GDP contracted 2.8% y/y in Q4 versus a fall of 1.5% y/y the preceding quarter, GUS data also showed. There was no change versus the flash estimate.

Household consumption declined 3.2% y/y in the fourth quarter, GUS data show. That is a changeover from an expansion of 0.4% y/y in the third quarter. Investment remained weak, dropping 10.9% y/y in Q4, the fall deepening further after -9% y/y in the preceding three months.

Overall, domestic demand retreated 3.4% y/y versus a drop of 3.2% y/y in the third quarter, according to GUS.

From the first quarter of 2021 onward, recovery is on the cards, analysts note. “However, a more visible rebound can only be expected starting from [the second quarter],” Erste wrote.

“Prolongation of lockdowns into January will likely weigh on the economic activity in the first quarter 2021 and we expect only a small positive quarterly growth dynamics, that should accelerate in the following quarters,” Erste also wrote.

There remains a considerable gap in analysts’ forecasts regarding growth in 2021 overall.

“For the whole of 2021, we maintain our GDP growth forecast at 4.5% for now, although downside risks remain … We are [still] facing another wave of COVID-19 in Poland and we have to deal with the effects of prolonged restrictions in Europe,” ING wrote.

Erste is much less optimistic, putting 2021 growth at just 3.1%, factoring in the same risk factors of the ongoing pandemic and the pace of vaccine roll-out.

On the other hand, state-controlled PKO BP predicts a surge in GDP growth to no less than 5.1%.

Polish core inflation rises to 3.9% y/y in March
Allegro will have to move fast to stem the Amazon flood
M&A hits €8.5bn in CEE in Q1, says Mergermarket