Number of coronavirus cases in Turkish metropolis “has exploded” 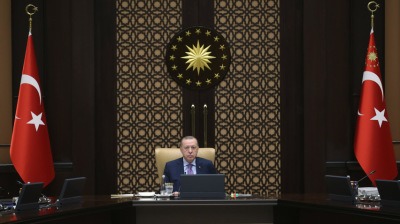 Erdogan has not been seen in public since on March 12 he chaired a meeting held at the presidential palace to discuss measures to tackle the spread of the coronavirus.
By Akin Nazli in Belgrade March 16, 2020

The positive results that were coming through were not related to infections picked up in foreign countries but were an internal matter, he added.

Adiyaman did not disclose which city he was referring to. He was speaking with the official nationwide tally of coronavirus (COVID-19) infections standing at just 18 cases as of March 16. bne Intellinews has since March 4 been running reports questioning the veracity of Turkey’s reporting on the virus status in the country. It was only late on March 11 that the country officially registered its first case. Given that Turkey neighbours Iran—which is enduring the world’s third biggest COVID-19 outbreak—the picture painted by Turkish officials has not seemed feasible. A US surgeon on March 10 raised searching questions as to the reliability of the officially-decreed testing kits and process Turkey is using.

“We are hearing from doctors all around the country that the number of cases is much higher than 18... The picture emerging in the last few days suggests that the epidemic could reach serious levels... We call on the health ministry to govern this crisis together [with us]…We need to act in coordination,” Adiyaman said during a separate press conference during the day.

“We need to indicate that the number of tests conducted for this virus… falls way short than what is required. We know that tests have been conducted for 7,000 patients so far [in Turkey]. But countries that have been successful in the struggle against the epidemic show that this number needs to be much higher,” he added.

The Turkish Health and Social Services Workers’ Union (SES) released a March 16 statement reading: “In almost all of the health institutions, there are health labourers who don’t have even surgical masks and gloves… There is no emergency action plan at our hospitals. Exercises have not been conducted based on extraordinary action plans… Health workers have not been trained in theory and practice as to how to provide a service during the time of an epidemic.”

“The number of hospitals where tests are performed should be increased… Existing healthcare services are carried out with an insufficient number of healthcare professionals and the workload is high,” it also said, while making a specific complaint about Ankara’ Bilkent City Hospital, stating: “The world’s third largest hospital service is provided in windowless units. It is said that there is no problem regarding the safety and reliability of the central air conditioning system but the control results are not shared with worker representatives.”

Hopes that President Recep Tayyip Erdogan—who has not been seen in public since March 12 when he chaired a meeting at the presidential palace in Ankara on coronavirus measures—will bring the necessary focus to addressing COVID-19’s impact on Turkey might well be in vain. Not unusually, Erdogan finds himself juggling several crises all at once. An economic crisis, another Turkish lira crisis, the Syria crisis, a crisis in relations with the EU and the Libya crisis, to name but a few.

On the evening of March 16, health minister Fahrettin Koca held a press call during which he confirmed Turkey would be announcing additional coronavirus cases, but he said the exact figures would not be available until night hours.