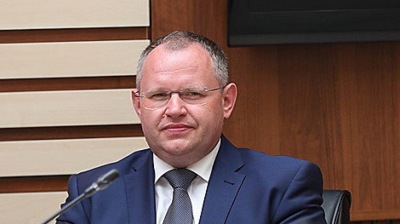 In April the IMF warned that Minsk needs a plan B to avoid recession or crisis. ITs got one.
By Ben Aris in London June 16, 2019

The International Monetary Fund (IMF) warned Minsk last November that it better have a “Plan B” ready if it could not persuade Moscow to pay it compensation for a change in the way oil exports are taxed that will badly affect the Belarusian budget.

The plan is ready, Belarus Finance Minister Maksim Yermolovich told bne IntelliNews in an interview in London on June 13 and there will be “no crisis” even if Minsk can’t reach an agreement with Moscow over the payment of compensation for Russia’s so called “tax manoeuvre”.

In its hunt for new revenues, the Russian Ministry of Finance will phase out export duties on oil and shift the tax burden over to the mineral extraction tax (MET) over the coming years in a so called “tax manoeuvre”. The upshot is that Russia is effectively scaling back subsidies it has given Minsk, which has two modern refineries and earns the lion’s share of its foreign exchange earnings from refining Russian crude and exporting it both back to Russia and on to the European Union (EU).

While the minister is not anticipating a crisis and says the government can cope with the change it will nevertheless impact the economy. In April the IMF cut Belarus’s growth outlook in half as a result of the problems from 3.1% year-on-year to 1.8% y/y.

Minsk has complained loudly about the change, demanding that Moscow pay it compensation for the loss of revenues, but so far these pleas have fallen on deaf ears. Yermolovich told bne IntelliNews that the current budget has been planned assuming no compensation, the tax manoeuvre is still at its opening stage and the pressure on the Belarusian budget will get worse in the next few years, so Minsk is preparing for the worst.

“There will be no crisis this year as the budget was planned to take into account no compensation this year or next year,” Yermolovich told bne IntelliNews. “But the situation will deteriorate from year to year. In three year’s time we have to be more ready if there is no compensation.”

According to the Belarusian finance ministry, the country’s budget revenue losses from the tax manoeuvre in 2019 alone were estimated at BYN600mn ($300mn), and the losses might total $2bn by the end of 2024. However, in December, President Alexander Lukashenko’s spokesperson said in a televised interview that Minsk already lost $3.6bn due to Russia's cutting of energy subsidies to Belarus. Due to Moscow's tax manoeuvre Belarus could lose an additional $11bn within the next four years, the spokesperson added.

The plan is to adjust the amount of sovereign debt the government refinances on the international capital markets and to modernise the two refineries: the Mozyr and Naftan refineries can refine 95,000 and 88,000 bbl/d respectively and there is a state plan to both increase their capacity and also go up the value chain, says Yermolovich.

“Our plan B is an adjustment of the oil refining strategy,” says Yermolovich who was in London to meet investors. “One way is the modernisation of the oil refineries, to increase their efficiency and switch to more profitable products that are competitive on the European market. Also we can buy crude oil on the European market. There is a already a big programme of modernisation for both refineries.”

The second plank of the plan is to adjust the government’s debt strategy. Under the current budget Belarus plans to use its trade surplus to pay down a quarter of the approximately $2bn of debt that matures this year and refinance the rest. However, if there is no compensation from Russia Yermolovich says that might change and Minsk will refinance all its debt to buy more time to adjust the refineries' profile as well as to start sourcing crude oil from elsewhere.

“One option we have is we can change our debt strategy,” says Yermolovich. “Now the revenues from the oil trade are a major source of revenue for our budget from the export of oil products, which is also the source of debt repayment... In the case of no compensation we are ready to raise the refinancing to 100% of the debt repayments to buy time to make deeper adjustments to the economy.”

The government has passed a conservative budget for this year that will be in surplus and the excess revenues used to pay down debt, and no new Eurobonds are planned until 2020, although Minsk will tap both the Russian government and the Russian bond market to refinance the outstanding debt, says Yermolovich, who was in London to prepare the ground for the eventual issue.

“The talks have shown that investors' interest in the Belarusian Eurobonds is high. Actually we have made the decision to sell the euro-denominated bonds,” the minister said.

Minsk is hoping to have more luck with its other claim for compensation from Russia, that Russian crude supplies to its refineries were contaminated with chlorine in May that temporarily shut down the pipelines. However, Yermolovich says that the “dirty oil” affair will have no impact on Belarus’s budget this year, despite the outage of crude deliveries.

“The budget calls for the refining of 18mn tonnes of Russian oil and if this doesn't change we will not lose anything,” Yermolovich says. “If there is reduction [in the volumes of oil refined] then there will be losses. But now its still too early to make assumptions.”

The only losses will be the cost of repairing the damage that the contaminants did to the refining equipment, but Minsk is seeking compensation from the Russian pipeline operator Transneft for those and it is liable under the terms of the supply contracts.

“Debt payments this year are roughly $2bn and our original plan was to refinance all the payments to Russia with new Russian borrowing of roughly $600mn,” Yermolovich says. “The budget this year calls for $400mn to be raise on the internal market. $700mn is the budget surplus used to repay debt. $300mn we planned to raise from the Eurasia Fund for Stabilisation and Development. And $100mn will be raised in Russia by issuing a bond on that market. There are no plans for another Eurobond.”

But the plans will probably have to be changed as there is a “a lot of uncertainty,” over the $600mn Russian loan, says Yermolovich.

While the Russian loan has been approved, is in the Russian budget, and the necessary law to release the loan has already been passed, the Russian authorities are sitting on the money. Political relations between Minsk and Moscow have been fraught this year as the two sides argue over compensation for the tax manoeuvre.

Earlier the same week, Anton Siluanov, Russian First Deputy PM and Finance Minister, said that Russia is not going to provide new loans to Belarus nor discuss possible compensation for Russia’s tax manoeuvre in the oil sector until the two countries agree on a vision for their further "integration".

In the meantime Yermolovich says Minsk is looking at alternative sources of financing, including the possibility of raising a yuan-denominated RMB3.5bn ($500mn) loan from the Chinese Development bank. “We hope there will be a deal in the second half of this year,” says Yermolovich.

More use can also be made of domestic borrowing as well, where Yermolovich says the government has already raised $500mn – ahead of the budget plan with six months left to run.

“And there are another $150mn of Belarusian bonds we could issue on the Russian market in the near future,” says Yermolovich. “We are technically ready with a two year borrowing programme to raise about RUB10bn – but the decision depends on market conditions.”

Between the Russian and Chinese bonds markets and squeezing some more out of the domestic market, Yermolovich is confident that the hole left by the delayed $600mn Russian loan can be easily filled if necessary.

“I don't know what the delay is,” says Yermolovich. “We have already fulfilled all the conditionality linked to the loan and all the necessary decisions on the Russian side have already been made. So we will see.”

Belarus' GDP 3% up in January-August, foreign trade surplus at record high
Belarus' gold, forex reserves down by 0.4% to $8.5bn in September
Inflation in Belarus at 1.3% in September