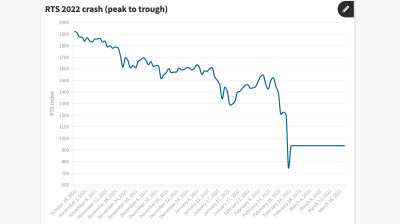 The Central Bank of Russia (CBR) will allow the Moscow Exchange (MOEX) to reopen on March 24 with trade limited to the largest 33 stocks and a ban on short selling as the regulator attempts to engineer a soft landing for the crashing market.

Trade will be limited to only the 33 biggest names, many of them state-owned. The market has been closed since Russia’s attack on Ukraine on February 24, when the RTS index stood at 937, down by more than half from its October peak of just over 1,900.

The index is anticipated to crash as soon as trading resumes, although where it will settle remains unclear. As bne IntelliNews reporting in a deep dive into previous crashes, at the low point of the 1998 crash the RTS fell to a mere 38 and in the 2008 crash its low point was just under 500.

However, in early trading after the exchange opened, the RTS index fell by a mild 5.5% to 886.75 points.

The CBR has taken circa $15bn from the National Welfare Fund (NWF) to buy stocks to cushion the fall and several of the leading state-owned companies have also said they will use funds to buy back their own stock.

BCS GM also reported that many Russian retail investors intend to buy stocks “for the long term” of up to five years, hoping to claw back some of the losses made since the war started from the bounce-back.

In theory the market should fall less than in 2008, as Russia’s economy is much bigger and stronger than then. GDP before the latest sanctions were imposed was worth just over $2 trillion, almost double its size in 2008.

However, the big unknown is just how big an impact the new sanctions will have on the economy. Estimates vary widely but a recent survey put expectations for this year at between an 8% to 15% contraction. Restrictions on the use of foreign exchange may also have an impact on the market’s recovery as foreign investors account for up to half of the turnover on the market, which was one of the best performing in the world until last October.

This week the CBR has resumed the trading on MOEX with the state ruble OFZ bonds, cushioning the market with funds and helping to stabilise the yields. After the smooth resumption of the OFZ trading on March 22, the CBR has removed the ban on short sales of OFZ.