The crisis in Ukraine is tearing at global relations on several levels.

The tension in the West was highlighted yet again by the lopsided sanctions imposed on Russia on July 16. While Washington targeted Russian banks and oil companies, Europe was unwilling to follow suit. The US is happy to cut into the business of some of Russia's most important companies, as it has little exposure to the Russian economy. However, a slowdown in Russia hurts Europe in the pocket: and an EU summit on July 16, while stiffening sanctions a tad, ducked out of naming specific targets.

On the ground in Ukraine, the country is being split asunder in what has rapidly developed into a de facto civil war. Separatists have become militias and militias have become guerrilla fighters; self-defence forces from the Maidan have become brigades and the Ukrainian army. Only a few months ago the violence was limited to hurling stones and Molotov cocktails, but that has given way to heavy calibre machine guns, mortar shells, bombardment from the air, Grad missile systems, and the indiscriminate shelling of towns and villages. The population of east Ukraine is literally being blown to pieces.

Understandably they have been fleeing. The numbers reported to be camped out in camped out in Russia or Crimea vary from 24,000 to over 100,000. There is also confusion over the death toll, but at least 250 servicemen, and about three-times as many civilians, have been killed in the fighting according to various reports.

The rising body count has unsettled Ukraine's European allies, and they are now calling for a pause in hostilities. However, President Petro Poroshenko appears determined to see the military operation through to the end to crush the separatists. The fighting is being fuelled by the major powers standing behind the two sides: the US is visibly supplying at least flak jackets and army rations to Kyiv; Russia is rather less innocuously supplying ammunition, sophisticated weapons, handheld missiles, mercenaries, and possibly even tanks and regular troops.

But the conflict has spread beyond Ukraine's borders and is straining European affairs due to the widely varying relations European states enjoy with Russia. Many find themselves caught between their alliance to the US, which is implacably opposed to allowing Moscow any say in Ukraine, and business and trade ties with the increasingly lucrative Russian market. Dependence on Russian energy is another major issue.

In the 1990s Russia was a basket case, but over the last 14 years the economy has made a dramatic recovery. It is not only a major energy supplier for much of Europe, but it is now the second largest consumer market in Europe (and soon to be number one). That sees a growing number of European countries increasingly dependent on Russia as an export market.

This dependence risks growing more acute as the European recovery has visibly slowed in the last month. The debt/GDP ratio in many European countries is now at, or over, an unsustainable 100%. Europe desperately needs to grow, but Germany and France both reported slowing industrial production growth in the last month, and the international financial institutions have started to warn that the European recovery could falter.

At the same time, loyalties have been split by the Russian proposal to build a third massive gas export pipeline to Europe. South Stream would ship up to 63bn cubic metres a year to southern Europe, and for the countries along its route (including Bulgaria, Serbia and Hungary) its offer of cheaper gas and lucrative transit fees is hugely tempting.

Even the bastions of the EU - Germany, France and Italy - are torn over what to do with Russia. They were amongst nine countries that were ready on June 15 to block the phase III sanctions that have been threatened in Brussels and Washington, according to Russian media. "France, Germany, Luxembourg, Austria, Bulgaria, Greece, Cyprus, Slovenia and ... Italy see no reason in current conditions to impose sectorial trade and economic sanctions on Russia and will stand against the measure during the summit," an unnamed EU source said, according to Prime.

"There is a big battle going on at present in the West over the scope/extent of new sanctions to be imposed on Russia," says Tim Ash of Standard Bank, summing up the situation. "The US is likely mindful that Ukrainian forces currently have momentum on their side, and might be in a position to re-establish control and order over Donetsk and Luhansk... by pushing further sanctions the US is trying to encourage Moscow not to further escalate on the ground. I think that is unlikely, as Moscow cannot now afford to let Poroshenko win on the ground in Donetsk and Luhansk, hence further sanctions seem inevitable."

Europe has to stand by its US ally at the political level, but at the economic level business lobbies across Europe are complaining. They have too much money invested in Russia to want to see the economy wounded in any meaningful way.

The upshot is an unseemly fudge. On the one hand, German Chancellor Angela Merkel makes unequivocal threats to increase sanctions; on the other hand, the European sanctions lists have drawn scorn for their weakness. As our chart shows, the US has been unable to create a united front in Western Europe, let alone garner support from the rest of the international community. 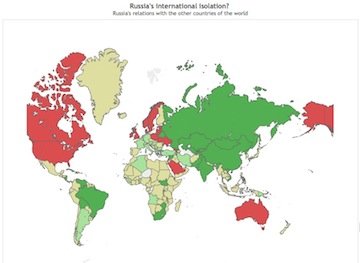 That puts relations at a global level under stress. The rhetoric coming out of the US White House talks of "isolating" Russia, but in reality its coalition is weak. Only a small proportion of the world's countries have signed up to the sanctions programme, with Canada, Japan and Australia the only states to join the US and EU in taking concrete action. Our chart shows (click on the map to see interactive version) that the condemnation of Russia's military adventures in Ukraine is not universal; it is actually limited to a few of world's developed markets.

Far from looking isolated, Russian President Vladimir Putin was surrounded by increasingly good friends this week during a trip to Brazil to attend the annual BRICS summit. The leaders of Brazil, Russia, India, China South Africa, as well as countries from outside the club - most notably Cuba - signed off on a multitude of deals, including the establishment of a BRICS development bank with $100bn in capital. The emerging markets have long criticised the current global multilateral lenders like the World Bank and the International Monetary Fund (IMF) for being dominated by the G-7 rich club. They want a development bank of their own and these five nations have the money to finance it.

There is then another outcome to the current confrontation; one in which Russia is not isolated. Instead the leading emerging markets, worried by the US lead in a unipolar order, increasingly co-invest, trade and cooperate politically to create a multipolar world - that will nevertheless include the US.

Together these countries already account for at least 40% of global GDP according to Goldman Sachs, which also said in a report last year that global trade is growing exponentially, with most of that expansion coming from the emerging markets.

This week's BRICS summit was a stark reminder that most of the attention has been narrowly focused on the row between the Kremlin and the White House. However in the meantime Russia continues to build its relationships with the other countries of the world, include many in the heart of Western Europe.

The economic slowdown in both Europe and Russia will play an important role in how this crisis plays out. It is easy to stick to principle when things are going well, but when they are going badly pragmatism and compromise takes over policy making.

The 2008 crisis has already shown the extent to which the globe's economies are intertwined. The crisis in Ukraine is taking on multinational dimensions and talks on that scale are needed. The continuation of the unilateral policies encapsulated by both Moscow's and Washington's refusal to compromise threatens a disaster of global proportions.