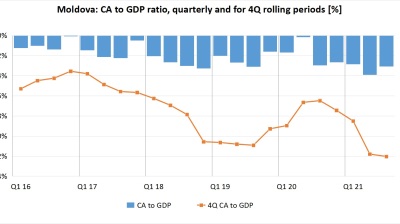 Moldova’s current account (CA) deficit widened by 14% y/y in the third quarter of 2021, to $400mn. The deficit in the four-quarter period ending September 2021 increased to $1.57bn, from $1.52bn calculated three months earlier.

Compared to the previous four-quarter period (ending September 2020), the CA gap doubled — but this is because the gap narrowed during the lockdown period. Compared to 2019 (the last full year before the COVID-19 crisis), Moldova’s CA gap still widened by 41%.

The country’s external deficit thus reached a new all-time record, both in absolute terms as well as compared to its GDP: the four-quarter CA gap accounted for 12% of the GDP over the same 12-month period ending September 2021.

The net import of goods, typically large in Moldova compared to GDP as a result of robust remittances financing private consumption, increased by 16% y/y to $1.07bn in Q3 and by 30% y/y to nearly $4bn in the rolling four-quarter period ending September. The net imports in the 12 months ending September thus accounted for 30% of GDP.

Wage remittances in the four-quarter period ending September (including transfers to households) remained below 14% of GDP but still financed 43% of the net import of goods. The remittances-to-GDP ratio has gradually declined from 16.4% in 2016 to 13.7% despite reaching a new record of $1.78bn in the four-quarter period ending September, up from $1.33bn in 2016.

Robust financing from abroad will further push nominal GED up over the coming years, while the indebtedness ratio is likely to advance at more moderate levels as the nominal GDP keeps expanding.

Compared to the end of September 2019, Moldova’s GED surged by 20.7%, as the country received financial support from international financial institutions (IFIs) during the COVID-19 crisis and non-financial corporations borrowed from abroad as well.