Moldova doubles inflation forecast for 2022 to 14% 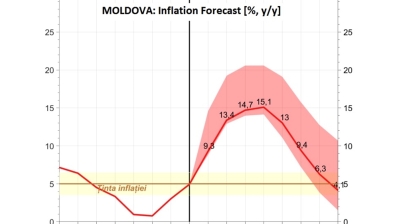 The National Bank of Moldova (BNM) has revised its inflation forecast for its entire forecast period, except for the last of the eight quarters under review, envisaging that the consumer prices will increase by 4.5% on average, this year, and by 14% in 2022.

The BNM thus upped this year’s average inflation forecast by 1.4pp and doubled the forecast for 2022.

The rise in inflation so far (6.7% y/y in September) was driven by both supply (energy, food, other commodities) and demand factors, BNM explained.

The annual inflation rate and core inflation will increase rapidly until the first half of next year, then decline rapidly towards the end of the forecast period, the third quarter of 2022. This trajectory will be largely supported by a positive fiscal momentum in the current year, the revival of external demand and the economic recovery in the current year.

The forecast, as well as the latest monetary policy decision (keeping the monetary policy rate unchanged at 5.5% on October 29) do not incorporate the outcome of the negotiations on the new natural gas contract, BNM governor Octavian Armasu said in an interview with Mold-Street. A natural gas crunch was avoided, but the prices will still increase and this will be included in future forecasts, as well as taken into account in the BNM’s policy decisions, he said.

The quarterly Inflation Report published by the BNM along with the revised forecast already envisages annual increase rates for the regulated prices (electricity, natural gas) of over 15% y/y during the second half of the eight-quarter forecast period. But Moldovagaz has already asked the market regulator ANRE to double the end-user natural gas prices in line with the steep increase of the prices charged by Gazprom ($450 in Q3 this year, triple the price paid in Q1). The price formula agreed by Gazprom makes possible lower prices next year, depending on the crude oil price dynamics and ANRE may require Moldovagaz to smooth the impact in terms of end-user price.

The magnitude of the shock to regulated prices also depends on the government's compensatory measures, the report reads. The government is currently considering end-user subsidies to mitigate the social effects of the high energy prices.