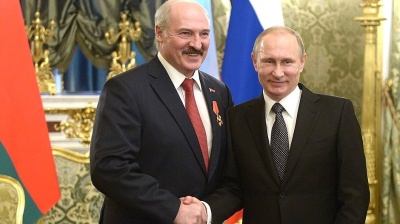 / wiki
By Gunter Deuber of Raiffeisen Research in Vienna September 22, 2020

Superficially, and especially from an economic point of view, the meeting between the heads of state of Belarus and Russia some 10 days ago was a non-event. Russian President Vladimir Putin promised Belarusian President Alexander Lukashenko $1.5bn in financial resources. But the payments were staggered payments and it is without question the money will do nothing to materially help Belarus. The “loan” will simply allow Belarus to remain liquid and solvent for another 3-6 or 9 months. All Putin did was kick the can a few months down the road.

And that's obviously all that is wanted by the more solvent actor in this relationship at the moment. Or in other words: currently Russia is ostensibly aiming at promoting its minimal interests: the protection of its (short-term) economic interests in Belarus, which include maintaining its solvency. The time has apparently not yet come to move on to boosting its long-term interests: to further a deep political and economic integration. A lot more money than $1.5bn would be needed to achieve these goals. More on this later.

At the same time the EU suggested it may lend Belarus €1bn in the last days, an idea floated by Poland and Lithuania. But this suggestion will probably be stillborn, especially since even in the rarefied upper EU political circles it is already clear that at least €5bn would be needed here just to stabilise the macro-economic situation.

The EU would not shoulder the weight of a €5bn loan to Belarus on its own; perhaps an international effort with other partners. But this will be tough to co-ordinate and not available immediately. Moreover, Russia has just shown that it can provide funds quickly; the EU can only come up with significant amounts of money in the longer term. For example, since 2014 the EU has made available around $15bn to Ukraine through various channels. This sum sounds considerable and may even come close to the financial needs of Belarus, even if Belarus' economic strength is equivalent to only half that of Ukraine at most, but it took six years to distribute that amount and Ukraine had to provide proof of hitting pre-determined goals to get it.

There are two issues on the table: stabilising a wobbly economy and long-term development. Focusing on the pure macro-financial stabilisation of Belarus, then financial support in the range of $3-4bn would be appropriate. This would allow foreign exchange reserves to be raised above critical levels needed to support the national currency and prevent a devaluation again and at least short-term solvency to be secured more sustainably. A further $3-4bn would probably be needed to ensure long-term solvency in the face of external debt payment obligations due in 2021. Minsk faces a heavy external debt redemption schedule of more than $3bn per year in the next few years and it doesn't have the cash to cover these at the moment.

The second part of the problem is raising funds to rebuild the economy after the severe coronacrisis-induced recession. It is necessary to allocate sums in the range of 4-6% of GDP, which would correspond to another $3bn a year that would have to be mostly financed externally. Currently Belarus is cut off from the international capital markets due to the heightened political risks.

In addition, at least parts of the $10-12bn of Russian subsidy losses as part of the “tax manoeuvre” that effectively ends Russia’s energy subsides to Minsk would have to be included in the previous development calculation, given the current macro-financial weakness of the country. If you assume a discount in the range of 50% for “belt tightening,” then there is an additional need of $5-6bn. And if one takes into account that major Russian banks and state-owned banks have reduced their long-term assets in Belarus in recent years, a clear support scenario might require a further $2-3bn as well as a another $1-2bn to compensate for the reduction in exposure by Western banks to Belarus in recent years.

Totting all this up and the bill is substantial: Belarus will need some $20bn in the short term and medium term to stabilise the economy. Even this large sum would not be a comprehensive Marshall Plan; that would cost even more.

It is a sum that Russia can easily afford, amounting to about 1-2% of GDP; the sort of money Russia has already destroyed as the price of its geopolitical escalations of tension and the ticket prices for entry into the geopolitical game. But that price tag is very expensive for the West and certainly not feasible at present. And yet, with the aid announced so far Russia seems extremely reluctant to bail Belarus out at the moment. From a strategic perspective at least four central conclusions can be drawn from this.

First, Russia obviously does not want to pay much to keep Lukashenko in office. Currently there is no Kremlin-friendly alternative to Lukashenko, so Moscow is playing for time and spending as little as it can in the meantime. Perhaps Moscow’s plan is to try to sit out the protests and, if necessary, building up an alternative acceptable candidate that can replace Lukashenko. Russia certainly has a great interest in showing that after a tenure as long as Lukashenko’s, an orderly and system-stabilising transition is finally possible. Certainly it wants to avoid the chaotic transition of power seen in most of the previous coloured revolutions that have been impossible to control.

Secondly, Russia does not want to position itself too clearly on Lukashenko’s side at present. It is attempting to avoid undermining too much the warm feelings most Belarusians and the political elite have towards Moscow, while a more cautious approach also has the added benefit of not exposing Russia too much to Western retribution and fresh sanctions.

Thirdly, Russia is probably still interested in creating even more favourable conditions for a deeper economic and political integration, which remain very likely to take place at a later stage. Without sustained financial support now, assets in Belarus will become even cheaper, and more may be available for sale later in a post-evolution fire sale to get the country going again.

Lukashenko has excluded the privatisation of valuable state-owned assets to foreign actors and specifically excluded Russian investors in this role. An even deeper economic crisis and further devaluation of the Belarusian ruble also fit in with this approach.

As the West is incapable of raising the sums of money needed for a sustainable rehabilitation of the Belarusian economy, Russia should be able to easily position itself as Belarus’ saviour in times of need. The upshot is the Marshall Plan, such as it is, will be a Russian Marshall Plan and not an EU one. If there is a further currency devaluation, the conditions for the creation of a combined ruble zone could become even better.

Fourthly, we should distinguish between publicly known information and secret agreements. Putin and Lukashenko met for four hours in Sochi and no details of the content of their conversation were released. The only information that was shared was the news of the $1.5bn loan, which was not a particularly difficult agreement to come to.

As a result, we see the announcement of deeper economic integration between Belarus and Russia, embedded in a political “Rublezone” framework, is imminent as the most likely basic scenario for the coming months.