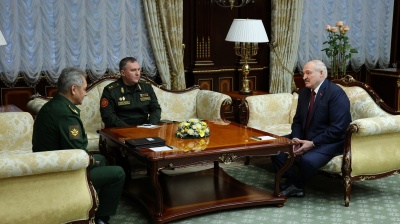 During a meeting with Russia’s Minister of Defence Sergey Shoigu yesterday, Belarus strongman Alexander Lukashenko said that he was planning to buy the Russian military equipment currently deployed in Belarus “in the following year and so forth”.

Amid escalating diplomatic and military tensions with Ukraine, Russia and Belarus have chosen to hold the military exercises “Allied Resolve”, which will be focused around Belarus border with Ukraine.

According to Nato estimates, Russia has deployed approximately 30 000 troops to Belarus. While official Russian and Belarusian sources are secretive about the exact amount of troops, they have confirmed Russia’s deployment of two divisions of the S-400 Triumf missile defence system, Su-35 jet fighters, Pantsir-S1 missile systems and 9K720 Iskander short-range ballistic missile systems to Belarus.

During his meeting with Shoigu, Lukashenko said that "if they attack, they will get it ... The situation is getting aggravated. They are pushing us towards a response." He also thanked Shoigu for his support, pledging that Belarus would “repay the debt”.

How this debt will be repayed is unclear, since it rather looks as if Russia will pay Belarus in loans for its military co-operation. Lukashenko has already voiced interest in buying the Russian S-400 Triumf two times last year, first in August and then in December. In August he said it would be done with the help of a loan, but there have been no talks of negotiations surrounding a loan for this purchase and buying it straight up would be too expensive for Belarus.

During his visit, Shoigu announced that Belarus and Russia would hold over 20 exercises in 2022, among these will be Belarusian soldiers’ participation in Russia’s eastern equivalent of its Zapad-exercises, Vostok 2022.

As was noted in an article for the European Council on Foreign Relations, Lukashenko has so far granted Russia nearly unlimited use of four airbases, a base for training in surface-to-air missile systems and 30 storage sites within Belarus’ territory. This is a dramatic change to the Lukashenko a few years ago, who strongly resisted many of Russia’s attempts at establishing a more permanent military presence in Belarus.

Today, Russia has succeeded in acquiring a de-facto permanent military presence in the country, and most likely many Russian troops will be in Belarus to stay. However, to what extent the air-defence systems will remain in Belarus is uncertain.

For a long time Russia has refused to supply Belarus with modern weapon systems, which has kept the Belarusian air-defence system weak and its ground forces left without air support. This policy has helped Moscow to keep Minsk's military capability in check regarding Russia. It may be that some of the currently transferred equipment will stay as a part of a permanent strengthening of the Unified Regional Air-Defence System (URADS). However, so far nothing is certain except that one piece of the S-400 Triumf is permanently stationed at the countries’ joint training centre.

Preparations for an attack?

Shoigu’s visit raises concern among western analysts that he’s delivered marching orders for Russian ground commanders and possibly also to Lukashenko. This is since Russia often chooses high-level visits like this to give information to its partners. Across the border, Ukrainian officials try to tone down the expectations of war as much as they can, being especially annoyed with the US and British announcements of imminent attacks. Some western analysts have also called Russia’s deployment in Belarus an invasion of Belarusian territory.

After the recent 18 months since the large demonstrations across Belarus against Lukashenko’s proclaimed victory in the 2020 elections, Minsk has certainly done what it can to move itself to the geopolitical front line. While one could call this recent change in Belarus’ geopolitical status one of the most dramatic shifts in Eastern Europe’s security calculus since Russia’s annexation of Crimea in 2014, it’s unlikely to warrant war.

As Bne IntelliNews has reported earlier, a war for Russia with Ukraine would be extremely costly in terms of economic as well as human resources, both from the war itself but also from the following sanctions. For Belarus’ weakened economy, this would be even worse. Washington has already warned Minsk that allowing Russia to launch an attack on Ukraine from its territory would warrant heavy sanctions. Thus if Russia got engaged in an all-out war with Ukraine, it would have more than its own long-term problems to take care of. It would also have to either completely prop up the Belarusian economy with loans, or manage what would most likely be a chaotic restructuring of Belarus’ economy. All of this can hardly appear appetising for Moscow.

Russia’s de-facto permanent military presence in Belarus is probably a part of the new defensive agreements hammered out between Belarus and Russia last year. Minsk certainly expects more Russian political support for its domestic repressions, as well as more economic support to prop up its economy amid an ever increasing amount of sanctions. Moscow, on the other hand, has in the past few weeks gained an official pretence to significantly strengthen its troop presence along the Nato border.