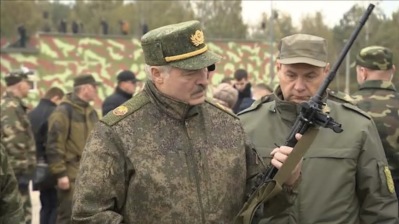 Belarus President Alexander Lukashenko has visited his third military base in a few weeks in a move designed to intimidate protestors and opposition candidates in the upcoming presidential election / wiki
By bne IntelliNews July 28, 2020

Belarus President Alexander Lukashenko has visited his third military base in the last few weeks in a move that is clearly intended to intimidate the growing number of protestors who are attempting to oust him in the August 9 presidential election.

At the same time, social media is reporting that the opposition are preparing a mass strike action at leading state-owned companies that will begin on the day after the election if they believe the vote has been fixed in Lukashenko’s favour.

In a separate but related move, the opposition have set up a platform where voters can register how they voted in the August 9 poll, but have to upload a photo of their ballot sheet. The platform was launched after the Central Election Commission (CEC) announced there would be no independent observers in the election. Moreover, all non-state media have been excluded from the press centre on election day. The CEC intends simply to announce the result of the final count the day after the elections.

The ballot registration platform is an attempt to organise an independent count of votes to head off a blatant fix of the count by the CEC. More than half a million Belarusians registered on the platform in the first week after its launch, or some 7% of registered voters.

Tensions are high in Belarus after the only opposition candidate to be registered for the race, Svetlana Tikhanovskaya, held a string of highly successful and well-attended campaign rallies in the last week.

Local observers comment that the turnout for these rallies has been on an unprecedented scale, as Belarus has never had a strong opposition movement. Tikhanovskaya herself is actually the wife of Sergey Tikhanovsky, who launched a presidential bid but was not able to run after he was arrested in July. Tikhanovskaya says her first act as president will be to call fresh “free and fair” elections after releasing all political prisoners. “I just want to go back to cooking my chops,” the former English and German interpreter said at a recent rally.

In addition to her husband, the most popular opposition leader is ex-banker and leading opposition candidate Viktor Babariko, who was arrested on money-laundering charges in June. Former diplomat and businessman Valery Tsepkalo fled Belarus last week fearing arrest, and is now in Moscow. He told Reuters he intends to tour Europe to highlight the plight of the country if the election is stolen.

The chances that Lukashenko intends to crack down on the inevitable protests using the military are becoming increasingly likely.

Instead of campaigning, the Belarusian strongman, who has been in office for 26 years, has visited three military bases in recent weeks with state-controlled TV crews in tow in what observers say is a blatant threat.

“Belarus President Lukashenka visiting the training site of the Minsk riot police, which was training for dispersing protests,” says Alex Kokcharov, a political analyst with IHS Global. “Here's a report on Belarusian state TV. Lukashenka is trying to scare the Belarusian people.”

The televised visits follow a day of military exercises in and around Minsk that included Spetsnaz, special forces and military APCs and boats in the river that send a clear message to the population.

“Lukashenko is not even trying to pretend that he talks to people and travels to villages and towns. He has visited three military bases in the past two weeks, to make sure that the military is ready to violently disperse protests. This is what was shown on the state TV Belarus,” Belarusian journalist Hannah Liubakova said in a tweet.

Other reports say that Lukashenko has moved nearly three quarters of the country’s riot police to the capital ahead of the vote, but observers point out that would leave the other cities in the country unguarded and possible venues for protests. The unusual feature of the current protests is they have been nationwide, whereas Belarus’ limited experience with large-scale rallies has almost always been limited to the capital.

Workers at large state-owned companies are also planning to strike if the elections are rigged, according to reports by the Nexta Live journalist Stepan Putilo, published on the Telegram channel.

The employees of the municipal unitary enterprise Brestzhilstroy are demanding a fair and transparent presidential election, the release of political prisoners and the removal of all charges against them. The workers have said they will strike if their demands are not met.

The strike will last from 10 to 11 August, if Lukashenka wins the elections. The workers also promise to join an indefinite national strike. Strikes were also announced by miners from Soligorsk, a branch of OJSC Grodno Azot, Belarus Metal Factor (BMZ) and OJSC SvetlogorskKhimvolokno.

Lukashenko has been left with trying to blame the mass protests on “foreign puppeteers”, naming Russia and Poland as the main culprits. He has also warned that there may be “another Andijan,” which is a reference to the mass shooting of protestors in Uzbekistan by its former president, Islam Karimov.