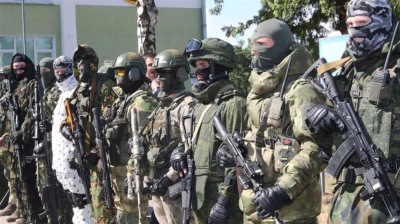 Belarus President Aleksandr Lukashenko called an urgent meeting of the Security Council on the evening of July 29 following the arrest of 33 Russian mercenaries in Minsk that may be a ruse to cancel opposition rallies or even postpone the elections entirely.

The mercenaries are members of the Wagner private army that has been fighting in Syria on behalf of the Russian government. Experts believe the arrest may be a ruse by the president to either sully the name of opposition presidential candidate Svetlana Tikhanovskaya or be used as an excuse to cancel the upcoming presidential elections completely on the grounds of “Russian interference” in the vote.

The Central Election Commission (CEC) has called on all candidates to meet on the morning of July 30, but has not said what the purpose of the meeting is.

“The overall operation also aims to seed mistrust to Tikhanovskaya among the protest electorate and cut her relations with the West (if any). Propaganda will likely link her to Russian mercenaries,” tweeted Frank Viacorka, an academic that follows Belarus.  “It also creates the perfect moment for Lukashenka to introduce the state of emergency and curfew, restrict campaigning or cancel the election, withdraw candidates. Soldiers can be introduced at each voting station. “Forget about elections, the country is in danger”.”

Tikhanovskaya is due to hold a large-scale rally in Minsk on June 30 that is likely to draw tens of thousands of participants. Further rallies may be banned now as a result of the perceived threat to the country say Belarusian observers.

During the security council meeting held in the evening, Lukashenko noted: “I've invited you to look into the matter of this, one can say, emergency that happened this night. There is no other word for it.” Aleksandr Lukashenko asked KGB Chairman Valery Vakulchik to describe the situation in more detail. The Belarusian head of state noted, according to Belta.by, a Belarusian news agency: “I've been looking at how the Russians respond to it. As they make excuses, they go nearly as far as saying we've brought them here on our own. It is clear they need to justify their dirty intentions in some manner. This is why I would like to ask you that everything must be extremely sincere and honest in this situation and with regard to this fact. If those are Russian citizens (as far as I can understand they've been questioned), it means we should immediately contact the relevant authorities of the Russian Federation so that they could explain what's going on.” The president also gave an instruction to Press Secretary Natalya Eismont: “We should contact Russian mass media, including Telegram channels, so that they wouldn't talk rubbish, as Putin says. If they are guilty, it is necessary to find a decent way out of this situation. If they are not guilty, we have no intention of besmirching a friendly country.” “This is why I would like you to briefly inform me about the situation and about what we have on our hands today,” the Belarusian leader noted.

Previously Lukashenko hosted a working meeting, which primarily focused on preparations for the upcoming annual address of the head of state to the nation and the parliament.

The content and organisational aspects of the presidential address and other topical matters were discussed with heads of government agencies and various officials in charge of preparing the event.