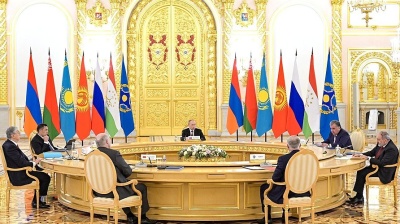 The presidents of the six CSTO member states met at the Kremlin in May for a summit of the defence alliance. / Presidential Exec. Office of Russia, cc-by-sa 4.0.
By Aida Kadyrzhanova in Almaty October 10, 2022

The sense that Russia is fast losing influence in its Central Asian “backyard” strengthened on October 9 when Kyrgyzstan, without explanation, announced that it had unilaterally cancelled joint military drills that were due to be carried out on its territory this week by the Moscow-led Collective Security Treaty Organization (CSTO).

It is the second blow the CSTO has taken in a matter of weeks—in September, following what it said was a deadly attack on Armenian border lands by Azerbaijan, Armenia made plain its disappointment at how little response there had been from the Kremlin-led military bloc and skipped a two-week CSTO military exercise in Kazakhstan, indicating it felt the defence bloc was ‘missing in action’. Some analysts concluded that CSTO members now saw Russia as barely able to think about providing post-Soviet states with an effective security guarantee given the beating many of its forces have taken in the Ukraine war.

Kyrgyzstan too feels it suffered a bloody invasion in September—while the Kyrgyz have periodically fought armed clashes with their Tajik neighbours since the demise of the Soviet Union, events last month shocked observers when forces from Tajikistan drove deep into Kyrgyzstan in what more or less amounted to a “three-day war”. Tens of thousands of Kyrgyz fled their homes. Barely a word was heard out of Moscow, though both Tajikistan and Kyrgyzstan are CSTO members, along with Russia, Armenia, Belarus and Kazakhstan.

Kyryzstan’s cancellation of the CSTO "Indestructible Brotherhood-2022" drills came two days after the country’s president, Sadyr Japarov, skipped the October 7 CIS summit in St Petersburg that featured celebrations of the 70th birthdays of both Russian leader Vladimir Putin and Tajik President Emomali Rahmon. Japarov almost certainly stayed away because of still raw anger in Kyrgyzstan at the military confrontation with Tajikistan. That anger will not have been assuaged by Putin’s decision to award Rahmon Russia’s Order of Merit for his efforts in ensuring regional stability and security.

The CSTO drills were also set to feature military contingents from Serbia, Syria and Uzbekistan. They were to take place from October 10 to October 14 in Kyrgyzstan's windswept eastern highlands.

Like Nato, CSTO is supposed to offer members a mutual defence clause. If one member is attacked, the other members are bound to come its defence. After the clash with Azerbaijan, in which scores of soldiers were killed, Armenia was asked to content itself with a “fact-finding mission”.

On October 8, Kyrgyz Deputy Foreign Minister Nuran Niyazaliev urged the CSTO members to establish a mechanism to prevent conflicts between its member states.

"Niyazaliev informed participants of the meeting about the consequences of aggression of Tajikistan against Kyrgyzstan and called on the countries to immediately establish a mechanism to prevent further cases of armed intervention, promoting peaceful resolution of all disagreements between the countries in accordance with the Collective Security Treaty and the CSTO Charter," a Kyrgyz Foreign Ministry press service official said.