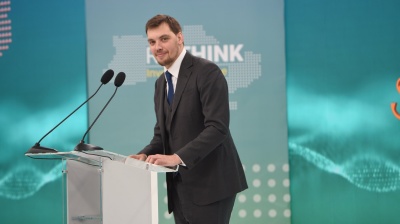 International investors and the entire Zelenskiy administration gathered in the Black Sea port town of Mariupol on October 29 for an international investment summit that represented the first get-together of Ukraine’s international friends since the Yalta Economic Summit (YES) summit in Kyiv in September.

Ukrainian President Volodymyr Zelenskiy is caught between a rock and a hard place. On the one hand the government has stuck to its hectic legislative programme that was set pretty much on its first day of work in the last week of August. Since then a blizzard of new laws have been rammed through the Verkhovna Rada as the plan is to enact or at least draft 500 new pieces of legislation before the end of the year.

The latest law to be passed was a bill that takes 1,000 state-owned companies off the list of enterprises that cannot be sold, which marks a relaunch of Ukraine’s privatisation programme. It's hard to keep up with the number of laws that are being passed and lawmakers themselves admit that they can barely read all the laws, let alone debate and revise them. But it is generally agreed by the ruling Servant of the People (SOTP) party that the key is to get as much of this legislation enacted while it still enjoys the mandate of its landslide victory in the July elections. The mistakes can be fixed later.

On the other hand a legal case wending its way through the courts that was brought by oligarch Ihor Kolomoisky to de-nationalise PrivatBank, and his open attacks on both the National Bank of Ukraine (NBU) and its former governor Valeriya Gontareva, have badly undermined Zelenskiy's reputation in the west. The International Monetary Fund (IMF) has suspended talks over the new Extended Fund Facility (EFF) programme until Zelenskiy clarifies his commitment to not returning the bank to its former shareholders.

Ironically the Kolomoisky problem really came into sharp focus at the last international gathering, the YES summit, when Kolomoisky arrived for dinner and flaunted his apparent immunity to the international community in the same week as Gontareva's house had been burnt to the ground in an arson attack.

Zelenskiy fudged his answer to this question during his marathon press conference at the start of October – and promptly saw the IMF pull back. Since then at a meeting with European ambassadors in Kyiv his head of staff Andriy Bohdan was much more explicit.

"Particular attention was paid to the negotiation process with the International Monetary Fund (IMF), the reform of the banking sector and the repayment of funds of bankrupt banks. Having made a decision on nationalisation, the state invested UAH155.3bn in PrivatBank, which allowed to save the funds of Ukrainians," a statement released after the meeting reads. "We believe that regardless of the decisions of the courts, there is no reason to return the state-owned PrivatBank to its former shareholders."

Which will do. For now. The IMF said they are sending their team back to Kyiv in November to resume talks and the Kyiv Economic Court that was due to deliver its verdict on October 17 has now suspended the case indefinitely while it investigates “related charges to the case” in secret. But like the logical impossibility of proving a negative, there is nothing to say that the issue of de-nationalising PrivatBank will not reappear sometime in the not too distant future.

Should we care? There is a very big fundamental problem with the western donors linking the IMF programme to the PrivatBank issue. For years the west has been lecturing the east about the need to stick to the rule of law and uphold the independence of the courts. However, when faced with an issue the west doesn't like – like ousting the democratically elected former president Viktor Yanukovych or expecting Zelenskiy to make the call on the Privatbank case and put the kibosh on the proceedings – all those values fly out the window.

Zelenskiy is right when he said in his presser that he doesn't have the authority to stop the PrivatBank case, but everyone knows that the system is so corrupt that he could easily do so if he wanted. (Indeed, in the meantime it seems he has done exactly this.) What should really trouble you is the fact that the west expects him to act in a corrupt way and interfere in the courts to prevent an unsavoury result, at the same time as calling very loudly for a crackdown on corruption.

Zelenskiy is damned if he does and damned if he doesn't. If he lets the case run its course then Kolomoisky has obviously bribed the court, according to Gontareva, and he will win a ruling in his favour, which the NBU says will result in the bank immediately going bust again as the finance ministry will withdraw its capital. If he interferes with the court then Zelenskiy is undermining those very goals to defeat corruption and the broken Ukrainian institutions that got him so overwhelming elected.

And why is Zelenskiy being so nice to Kolomoisky in the first place? It is because those courts are so corrupt that actually Zelenskiy needs people like Kolomoisky on his side. The western point of view is that Zelenskiy should uphold the rule of law, but the problem is the institutions that exercise this power are fundamentally rotten. So that leaves you with your “roof” or your “krysha” as it is known in Russian – the people you know in positions of power or influence that can help you get things done. As bne IntelliNews argued in an op-ed several years ago the system is not corrupt, corruption is the system. Former president Petro Poroshenko did nothing to undo this problem – and if anything he made it worse. Zelenskiy’s legislative blitz is putting in a raft of laws to finally deal with these issues, but he is still only building the foundations. In the meantime he still needs powerful people to actually get anything done. Kolomoisky’s money and more importantly his media empire remain very useful tools in Zelenskiy workbox and, it seems, ones that he is not prepared to give up for the moment.

It's a question of pragmatic politics. The irony of the situation is that if the west really was convinced of its values then it would not call for Zelenskiy to “come clean” on PrivatBank as that means they are effectively calling for him to break the law and interfere with a legal process. Ironically the west should be calling for the Kyiv Economic Court to finish its hearing and for everyone to stick to the result no matter how unpalatable. And that is not going to happen.

The result is everyone is going to have to also find a fudge. Stepping back, this is probably in everyone’s interests. There is a propensity in the west to get hung up on cause célèbres, as under Yanukovych the EU tied aid to Ukraine to the release of opposition leader, former prime minister and head of Batkivshchyna (Fatherland) party Yulia Tymoshenko, who was thrown in jail on politically motived charges. But as the recent elections showed, she was really not that important to the fate of the country, which has moved on in the meantime.

So the west should hold its nose and let Zelenskiy fudge his relationship with Kolomoisky and the issue of PrivatBank’s de-nationalisation. No one wants to see the bank returned to Kolomoisky, who will be allowed then to keep the $7.6bn he stole. But if that is how Zelenskiy wants to play it, then that is on his head. He has to answer not to the IMF or to Brussels, but to the Ukrainian people. They are used to corruption amongst the elite and inured to it. If Zelenskiy goes on to deliver on his promises of peace and prosperity then I believe they will forgive him the favour he showed to Kolomoisky. If they don't forgive him then at the next elections they will be a little more demanding of the candidates and what they promise before they are given the job of president. That is how it is supposed to work.

And it could be some of Ukraine’s friends are starting to appreciate these realities. Tim Ash, senior sovereign strategist at BlueBay Asset Management, was among the guests at Mariupol yesterday and has been one of the most vocal critics of Zelenskiy's lack of action on the Kolomoisky question. But after spending a few days with the entire cabinet he has significantly muted his tone.

“I spent the last few days interacting with the cabinet and I think they are serious about reform. The Privatbank issue is though huge and I think they need help from the West in dealing with it. Ukraine legal system might not be up to task still — let’s hope,” Ash tweeted from the conference.