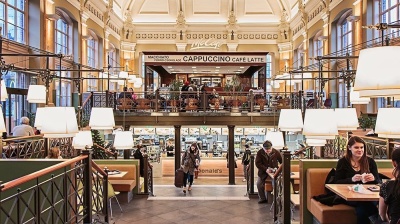 One of the most beautiful McDonald's restaurants is located in downtown Budapest near Nyugati railway station.
By bne IntelliNews January 19, 2020

The contribution of Hungary’s McDonald's to the country’s GDP reached HUF153bn (€456mn) between 2014 and 2018, according to a study by consultant KPMG released on January 18. The figure includes HUF83bn in taxes and contributions by the company and its franchisees, and HUF27bn in investments.

McDonald’s opened its first restaurant in Hungary in April 1988 and since then it has become a dominant player in the fast food market. It has 89 restaurants, including 41 owned by the fast-food company and 48 operated by franchise partners.

The restaurants serve about 80mn people a year. Last year, some 6,800 employees worked at McDonald's, including restaurant and office staff, or 2.6% of the total workforce in catering.

The company posted an operating profit of HUF4.7bn in 2018, up from HUF2.8bn a year earlier. Revenue went up from HUF27.6bn to HUF34bn in the same period.

McDonald's purchases a third of its fresh produce and raw materials from domestic suppliers, primarily chicken, eggs, honey, onions, lettuce, tomatoes, ketchup, and some beef and packaging. The 11 largest suppliers tripled the value of products sold to the company in five years, amounting to HUF12bn in 2018.

Overall, the Hungarian units purchased 39.500 tonnes of products last year from domestic and foreign suppliers, up by 38% from 2014.

Hungarian businessman Sandor Scheer, founder of market-leading construction firm Market, took over the Hungarian operations of McDonald's a year ago. The parties did not disclose financial details, but local media reported the deal was above HUF10bn.

Scheer promised modernisation and the opening of new units in smaller towns.

Scheer became the Developmental Licensee (DL) of the Hungarian operation, in charge of business strategies and expansion, while day-to-day duties remained in the hands of McDonald's Magyarország CEO Agnes Horvath.

Scheer was ranked 49th on Forbes richest men list in 2018, with wealth of HUF31bn. He founded Market, a leading construction company involved in numerous state-financed projects, including many stadium constructions. The company realised HUF7bn in profit in 2018, up from HUF6.5bn a year earlier.

Russia’s CBR reserves down $43.7bn since the start of the war
17 hours ago
Industrial inflation exceeds 25% y/y in Moldova
18 hours ago
Romania’s construction companies post robust 6.5% growth in Q1
18 hours ago
Russians trade TV news for social media as war-weariness sets in
1 day ago
Net FDI in Bulgaria jumps four times y/y through March to €1.05bn
2 days ago