Kazakhstan: No end in sight for protests in western region 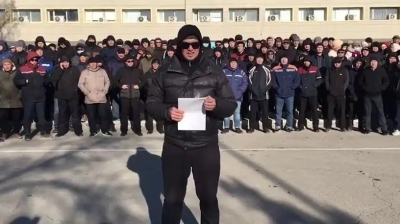 Unemployed people in Zhanaozen delivering their demands in a video message. / RFE, screenshot.
By Almaz Kumenov for Eurasianet February 22, 2022

The west of Kazakhstan is in ferment once more.

Only six weeks after protests in the Mangystau region triggered a chain reaction of nationwide rallies that culminated with deadly unrest in the city of Almaty, oil workers have come out onto the streets with demands for higher pay.

In Zhanaozen, employees of Uzenmunaigas, a subsidiary of a state-owned energy company upon which the town’s economy depends almost entirely, have been on strike since February 15. They have two main demands: more pay and an end to prosecutions and the alleged physical abuse of people detained over their involvement in last month’s protests.

“The detainees are not terrorists. We want an end to the torture and for them be released! The authorities must pursue political reforms,” a rally ringleader, Orazbai Tursynbai, told RFE/RL’s Kazakh service, Radio Azattyk.

Tursynbai was a prominent figure in the months-long Zhanaozen worker protests in 2011 that ended in a deadly clampdown by police in December that year. Fully 16 people died after police opened fire on protesters.

The protest mood in Mangystau is spreading beyond just the energy sector, whose workers have traditionally displayed most resolve in their confrontation against employers.

On February 14, local state-employed veterinarians recorded a video message threatening to stop working from March 1 unless their salaries are increased. Their complaints included the charge that even the best-qualified and most experienced vets are earning salaries of no more than $200.

Drivers for the Mangystau regional government have likewise complained about their low pay and called for their salaries to be doubled.

Then there are the unemployed. Groups of Zhanaozen residents have been gathering outside the city hall for weeks pleading to be given jobs in oil companies. A group involved in a picket on February 14 recorded a video message urging the end to a freeze on the hiring of new staff in the oil and gas industry. They also appealed to President Kassym-Jomart Tokayev to visit the region and deal with people’s discontent directly.

Uzenmunaigas imposed a moratorium on new hires in 2015. The stated money-saving strategy of its parent company, KazMunayGaz (KMG), has been to farm out more work to outsourcing companies.

Mangystau regional governor Nurlan Nogayev has been at a loss to deal with any of these or earlier protests.

When people came onto the streets in Zhanaozen in early January in a show of anger at the sudden spike in prices for car fuel, he addressed the picketers in person, only to be snubbed. This time around, he has stuck to issuing a statement through his office’s website pledging to provide jobs.

“Problems will be solved, but not immediately. It takes time,” he said in the February 15 statement.

The capital too is showing some signs of nerves over the fact that public discontent in the west will not abate. On February 17, Nogayev spoke with Tokayev, who delivered a “number of specific instructions” on the socio-economic development of the Mangystau region.

Tokayev appears for now to be buying time.

“Despite the measures we have taken, the dissatisfaction of workers is growing, this must be spoken about openly. All the needs of the workers must be carefully studied. Their legitimate interests must be respected. We need to build a constructive dialogue between trade unions and company owners,” he said at a government meeting on February 8.

Allusions to the role of trade unions may engender the bitterness rather than mitigate it. Kazakhstan’s authorities have been waging a sustained battle against independent unions and sought to compel workers instead to enroll in organisations closely aligned to the state. The government has latterly demonstrated some signs of willingness to yield from its hardline position, although rights activists worry it has not gone far enough.

Toleutai Rakhimbekov, an analyst at a government-affiliated think tank, wrote on Facebook that it was past time that the government devote more attention to the distant provinces. “Low incomes, unemployment, and the perennial rise in prices for foodstuffs” is leading to the underdevelopment of rural communities and the agricultural sector, he wrote.

“Apparently, January 2022 taught us nothing,” he concluded.