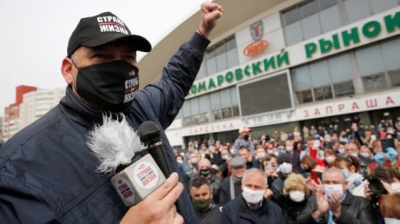 Belarus' General Prosecutor has launched a criminal case against jailed presidential candidate and video blogger Sergei Tikhanovsky accusing him of planning mass riots and seizing his property in lieu of $1.2mn worth of damage caused to the state
By Ben Aris in Berlin May 6, 2021

The prosecutors have sent the necessary documents to the country’s Supreme Court and have begun a criminal case against the video blogger, who was on track to come in second in the elections if he had not been arrested a month prior to the vote.

The most likely candidate to win, according to polls at the time, was ex-banker Viktor Babariko, who was also jailed. Tikhanovsky’s wife Svetlana stood in her husband’s place and successfully rallied the entire country to their cause. According to independent polls Tikhanovskaya won the vote by a landslide. According to the official results, Belarus' President Alexander Lukashenko won by a landslide. Tikhanovskaya was driven into exile in Lithuania and has been touring Europe ever since to rally European support against Lukashenko.

"According to the case files, Tikhanovsky, Statkevich as well as Sakov, Popov, Losik, Tsyganovich and other individuals from June 2019 had plotted large-scale riots in the country in the run-up to and during the presidential election in the Republic of Belarus in 2020," the Prosecutor-General’s Office said on its website, as cited by Tass.

Prosecutor said that the accused used “modern political technologies” in order to “sow discord and distrust” among citizens and promoted “negative sentiment towards the state authorities,” which ironically is a fairly accurate description of what they did.

Tikhanovsky is one of Belarus’ best known video bloggers and ran the very popular “Country for Life” YouTube channel, where he agitated against the Lukashenko regime. Tikhanovsky raised more than the requested 100,000 signatures to stand as a candidate in the presidential vote, but was arrested a month before the event.

"Tikhanovsky and other persons linked to him under various pretexts, which among them include a collection of electorate signatures to nominate a presidential candidate, carried out illegal mass events in Minsk, Brest, Grodno, Mogilev, Soligorsk, Miorah and other cities in the republic,” the prosecutor said, referring to the well-attended rallies Tikhanovsky organised for his supporters.

During these events they spread information aimed at "fuelling political and social tensions in the country, and whipping up other social hatred among social groups," the prosecutors said.

According to the Prosecutor-General’s Office, on May 27, 2020 Tikhanovsky, who sought to hinder the work of the Central Election Commission during a video broadcast in Mogilev, along with Sakov and Popov "appealed to threaten the commission’s chair Ermoshina by holding illegal mass events outside her house, violating her immunity and breaking into her home, and other limitation of her legal rights.”

Ermoshina oversaw the official count following the August 9 vote and declared Lukashenko the winner. She also immediately burnt all the ballot papers, making a recount impossible.

A few days later Tikhanovskaya went to see Ermoshina to lodge a formal complaint over voting irregularities. However, two members of the security services also attended that meeting, at the end of which a tearful Tikhanovskaya appealed to the population to accept the official count, but fled the country herself the same day. As the rioting got worse Ermoshina also fled the country in fear of her life and also sought refuge in the Baltic States.

During a search of Tikhanovsky’s summer home in the Gomelsky district, investigators claimed to have seized $900,300 in cash, an air pistol and an air rifle. The pack and serial numbers of banknotes confirmed that the blogger had obtained them from a banking or financial organisation simultaneously.

Damage to the state

While the charges appear laughable in the context of a political campaign, the basis of the Prosecutor-General’s case is these actions caused damage to the state to the value of BYN3mn ($1.2mn) and have seized Tikhanovsky’s property in lieu of these damages worth an estimated BYN2mn ($775,000).

The Belarusian prosecutors concluded that the charges against the suspects and the restriction measure were “well-founded” and “substantiated by evidence,” Tass reports.

In accordance with Belarusian criminal law, the suspects face up to 15 years in prison if convicted.

Human rights groups estimate there are now over 300 political prisoners in Belarus as Lukashenko cracks down on his opponents during the worst political crisis of his 27 years in power.

In the meantime, all the leading members of the Coordinating Council that was set up in the first month of the protests to negotiate a transfer of power have either fled into exile or are in jail.

Maria Kolesnikova, one of the two other women that ran together with Tikhanovskaya in the election in supporting roles, was the only one of the three that did not have children and the only one to remain in the country. She was also snatched from the street by security forces, who attempted to forcibly eject her from the country. But when she ripped up her passport on the Ukrainian border she was taken back to Minsk and charged with plotting a coup and setting up an extremist group. She remains in jail awaiting her trial and faces years in prison if convicted.

Babariko has also been charged with embezzlement and faces a stiff jail sentence if convicted.

After the initial successes of the weekend protest marches that brought over 100,000 demonstrators onto the street on Sundays throughout the summer, swamping the security forces, the protests died off over the winter and despite a call to the streets in March by Tikhanovskaya they have failed to restart this year, although low-level protests have continued unabated.

Lukashenko came close to being ousted, but after the Kremlin came out in his support at the end of August and Russian President Vladimir Putin said he would send forces to quell the unrest in Belarus “if necessary” on August 27, Lukashenko has retaken the initiative.

A brutal crackdown remains in place. Lukashenko made protesting a criminal offence in November, which carries a punishment of several years in jail, by upgrading protests from an administrative offence that carries a maximum of 15 days in jail. Factory directors of the state-run enterprises have been pressed into service to weed out ringleaders and activists in order to head off the threat of a general strike. And the entire foreign press corporate was stripped of their accreditation, while dozens of local journalists have been arrested and charged as Lukashenko attempts to control the situation.

There is an uneasy stand-off now as Lukashenko is now entirely dependent on the security services and the Kremlin to keep him in office. The progress he had made in improving relations with the EU has been undone, leaving Lukashenko in the weakest position he has ever been in and entirely reliant on Russia for his authority and money. However, despite Tikhanovskaya's relentless touring, the EU has after an initial round of sanctions on Lukashenko and his elite been powerless to bring any effective pressure on him, and the two sides – the people and Lukashenko – are locked in a stalemate.