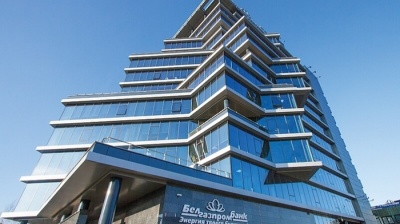 The Belarusian central bank has appointed an interim administration team to take over the Russian-owned Belgazprombank after authorities searched the bank’s offices last week. The top management of the bank have been arrested and charged with money laundering. / wiki
By Ben Aris in Berlin June 15, 2020

The Belarusian central bank (NBB) has appointed an interim administration team to take over the Russian-owned Belgazprombank after authorities searched the bank’s offices last week. The top management of the bank have been arrested and charged with money laundering.

Belgazprombank is owned by Russia’s Gazprom and Gazprombank. The NBB has appointed Nadezhda Yermakova, who was the regulator’s chairwoman in 2011-2014, as the head of the bank, the regulator said in a statement on June 15.

The State Control Committee of Belarus searched the headquarters of Belgazprombank on June 11 and detained 15 people connected with the bank on the following day, including its deputy CEOs and heads of departments. The detainees have been charged with money laundering and tax avoidance.

“In order to protect the interests of depositors and creditors of Belgazprombank and to prevent worsening of its financial condition, the management of the National Bank of the Republic of Belarus issued a ruling on June 14 to introduce an interim administration to the bank on June 15 that would manage the bank. … Nadezhda Andreyevna Yermakova was appointed as the head of the interim administration,” the regulator said in a statement.

Commentators speculate that the raid on the bank is connected with the upcoming presidential elections, slated for August.

Viktor Babariko has been the CEO of Belgazprombank for 20 years, but was not arrested or indicted. However, he is running for office against Lukashenko and is a popular opposition figure.

Prosecutors allege that an organised criminal group worked in the bank, stripping its assets and sending them abroad. The committee previously sent requests to foreign countries, and received a response in December 2019. The information in the response allowed the committee’s financial investigation department to launch searches in the bank and find evidence that the people were part of a criminal ring, and stripped assets, Iven Tertel, chairman of the State Control Committee, told reporters on June 12.

While Babariko has not been arrested, the authorities said they had proof he was involved in criminal activity, because “the deputy CEOs’ illegal operations were of such a scope that the CEO had to be aware of that,” according to Tertel.

The powers of the bank’s administration have been suspended for the period of operation of the interim administration, the central bank said.

Gazprom and Gazprombank, which own 49.818% of the bank’s shares, have protested against the takeover and said that Belarus has illegally appointed an acting CEO to Belgazprombank, and that the shareholders will protect their rights by all legal means.