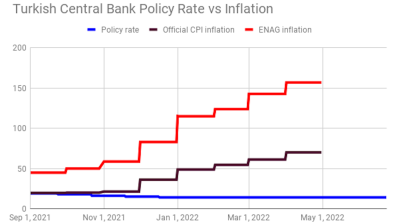 / bne.
By Akin Nazli in Belgrade May 27, 2022
Turkey’s zombified rate-setters on May 26 again held the benchmark rate and, once more, the only surprise was just how inured the markets have become to what’s widely seen as basket case monetary policy from the Turkish central bank.

For a fifth straight month, the regulator’s monetary policy committee (MPC)—which rather than meeting should actually just pop over to the palace to get its instructions—held its policy rate at 14% in line with resigned expectations (though certainly not with economists’ recommendations). The move came, of course, despite worsening rampant inflation and the latest stage in the collapse of the Turkish lira.

On May 5, the Turkish Statistical Institute (TUIK, or TurkStat) said that Turkey’s official consumer price index (CPI) inflation in April amounted to 69.97% y/y in April, following on from the 61.14% reported for March.

On April 28, the central bank hiked its expectation for end-2022 official inflation to 43% from the prediction of 23% it presented in its January inflation report.

The upper limit on the official inflation forecast was also moved up, taking the expectation to 47% from 28%.

The authority expects official inflation to peak at below the 75%-level in May and to fall across the remainder of the year (thanks to the base effect).

The guidance is based on the assumption that the Turkish lira (TRY) will not experience another crash. On May 26, the USD/TRY pair was up 11% to 16.40 compared to the 14.79 registered on April 28.

Turkey’s central bank still goes about its business serving as a lira printing house and as an accounting department at the beck and call of the palace administration.

The country’s monetary policy is absolutely inefficient and makes no sense at all. It bears repeating.

The stress in commodities directly related to Russia or Ukraine (such as with wheat, sunflower oil and natural gas) continues.

The FAO food price index declined from a record high of 159.7 in March to 158.5 in April, up 30% y/y. A fresh record may be on the way for May as wheat prices have broken records in the month.

On June 23, the MPC is expected to hold its policy rate constant again at 14% at its next rate-setting meeting.

On June 3, TUIK will release the official inflation data for May.

So, what we have could be described as an undesirable but still controlled devaluation. All eyes are on where the exchange rate might stabilise.

Unknown is how much is flowing into the central bank’s account from the lira deposit protection scheme and exporters/tourism companies, while the reserves continue to decline.

If the Erdogan regime can manage to get through May, it could enjoy a less troubled two-month period with dry summer liquidity. This does not mean a shift in the lira’s secular trend to the north pole.

Some relaxation is already observable in the yield on 10-year US Treasury papers and in the USD index (DXY). However, the current situation is a long way from normality. Don’t dispense with the idea that a colossal meltdown could be ahead.

In May, a limited recovery in Turkey’s external balances will continue as gas bills decline and the tourism season begins.

Turkey’s 5-year credit default swaps (CDS) hit a record 730 on May 24 while the yield on the government’s 10-year eurobonds moved up into the 9%s.

There is no foreign interest in Turkish papers. Debt-rollovers continue undeterred but with no fresh inflow. Eurobond auctions stopped in March. Net FDI remains around zero.

To date in 2022, Turkey has pumped TRY714bn in lira loans into the economy. The figure is already a record with more than half of the year to go. The previous all-time high stood at TRY711bn. It was recorded in 2020.

Despite the ultra-loose monetary policy, Turkey's economic activity has not responded positively. At the same time, Turkey's big export market, namely Europe, has endured its own slowdown since the beginning of 2022.

The Fed’s balance sheet has stopped breaking records. A record $8.97 trillion was registered as of April 12. As of May 17, it stood at $8.95 trillion.

On June 15, the Fed’s open market committee is expected to deliver another 50bp rate hike following its next meeting. Updated projections from the governors will also be released.

Since May 4, Joe Biden has been talking about reducing the budget deficit. The finance industry’s big dream, namely, the pumping in of money via fiscal policy instead of monetary policy, is now a broken dream.

Tightening via both monetary and fiscal policies will mark out the upcoming period. How long it can possibly last will be under observation. There is already talk of ending rate hikes in September.

Via monetary or fiscal policy, the money printing must proceed; or the world will enter a crippling recession that will bring political costs.

Currently, inflation is also bringing costs. So, via both ways, social tensions will keep on rising.

Wars, of course, can solve policymakers' woes. The Ukraine War has gotten a bit stale. Bigger wars are required to support economies and manufacture consent among the masses.

Otherwise, a redistribution of wealth and economic surpluses is required. However, this is a non-option. It has never happened throughout history without force.

The world is turning into a global Turkey. This always happens when inflation gets out of control. They call it “Everyone’s consumption basket is different.”

Next year, the story will be the “base effect” while inflation is declining and prices are breaking records.

On May 23, Lagarde came up with a blog post saying that she expects the bond-buying programme to end very early in Q3 (June 9). A rates lift-off would follow in July and the negative policy rate would end by end-Q3, according to Lagarde.

The ECB’s main policy rate (Euro area deposit facility rate) has been in negative territory since 2014. The last time when the ECB attempted to hike its policy rate was in 2011. Greece, Ireland, Spain, Cyprus and Portugal, as a result, bankrupted.

In Turkey, there’s a hue and cry, but not much sense is spoken. People are angry and on edge due to the sum of the situation of the country. Everyone agrees with the consensus that the country is exposed to turbulent times in the period that lies ahead.

The regime has shown signs of aiming to fuel tensions. However, by now it is too weak to keep dominating the country’s agenda with inane issues.

Even Turkey’s hapless main opposition leader Kemal Kilicdaroglu, the Republican People’s Party (CHP) chair, is able to nullify the regime’s attempts at setting the media agenda. Right now, Kilicdaroglu is currently steering that agenda for the first time in his life. Not that most of it isn’t drivel.

If Turkey had a real opposition, it would seek open guarantees (recorded in the media) from the regime, Turkey’s security forces, Nato (the Pentagon) and the US that they will await the final results of the upcoming elections and obey them.

Then, a small touch on the scales would be enough to push the regime into calling urgent elections. Countrywide daily rallies, simply keeping the demand for snap polls top of the news, would suffice. If more were needed, a general strike could easily bring about the required day at the ballot box.

Turkish politics, however, would rather deal with nonsensical issues.

The latest wave of tension flared up with dogfights over migrants. Next, media headlines suggested that Erdogan had banned CHP Istanbul chair Canan Kaftancioglu from politics. This may sound like a big deal, but she will be doing her job. She will enter jail for one day or a maximum of three days and she will be released again.

In general, Turkey always changes its agenda faster than its shirt. Even if a nuclear bomb hit the country, it would top the agenda for no more than three days. Then, some thick-headed brawl among politicians would take over the news.

As a response to Erdogan’s Kaftancioglu move, Kilicdaroglu shone some attention on Sadat, a company that officially provides paramilitary services. Kilicdaroglu can’t even manage to enter a public toilet in Turkey without getting lost on the way out. However, in a sign of how weak the regime has become, officials took Kilicdaroglu’s Sadat move with some seriousness.

This past week, Kilicdaroglu has attempted to explode into view waving documents that he claims show Erdogan is transferring money abroad in advance of fleeing the country when he loses the election. The story should fizzle (there have been plenty like it before), but the Erdogan media has spent a few days declaring that Erdogan will certainly not flee.

In foreign policy, Erdogan is raising a stink again, trying to call the shots on who can, and who can’t, be in Nato. He always aims to be the noisiest politician in town. But even peasant peoples of Inner Mongolia know by now that he talks baloney. He thinks he barks, but by now it’s just babble. No one, except the mainstream media, takes him seriously.

Nevertheless, Erdogan actually still enjoys the support of the major powers in the US-led Western bloc. Everyone knows it is simply Erdogan’s style to act like the West’s spoilt kid. His high-stakes insults actually make no sense beyond offering up clickbait for the press.

Net-net, there’s too much noise but no significant developments. The Turks await their fate. Will Erdogan delay the elections, declare another fake victory and fight or flee?

ISTANBUL BLOG: With official inflation a hair’s breadth from 70%, Turkey is on the tail of Zimbabwe