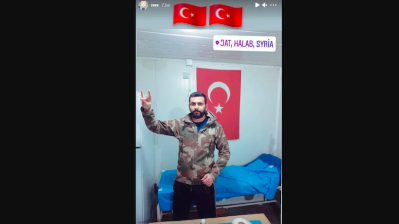 Onur Gencer gives the far-right sign of the wolf.
By Akin Nazli July 1, 2021

The killing of Deniz Poyraz should not be seen as an isolated hate crime but rather as part of a broader government-led crackdown against the Peoples’ Democratic Party (HDP), Pakize Sinemillioglu, co-leader of the party’s Ankara branch, told Voice of America on June 23.

Six days earlier, Poyraz was brutally murdered in the Izmir office of the HDP, Turkey’s main pro-Kurdish party and the country’s third-largest party, with 55 seats in the 583-strong parliament.

“This government feeds on chaos and tries to stifle the opposition, particularly the HDP, through all means. Those who have not dealt with us through legal and political means have now mobilised their killers. The government has put its chaos plans into action,” HDP co-chair Mithat Sancar, a prominent professor of law, said following the brutal and fatal assault.

He added that the attack could have become a massacre if the HDP had not decided at the last minute to postpone a meeting of 40 local party chairpersons scheduled for the morning.

The gunman, said Kemalbay, entered the office at 10:30, when Poyraz was there alone.

“She was there [at the office] to tell us that her mother, who is our regular office worker, would not come on that day,” Kemalbay told Al-Monitor. “I was on my way to the office.”

The murderer shot Poyraz, then fired shots at the doors of locked offices and tried to start a fire.

There are allegations that the suspect, Onur Gencer, did not carry out the attack alone. Police have confiscated camera footage shot of the area around the office and have deleted footage recorded by nearby shops.

“[Deniz Poyraz] was a militia collaborator who was part of a ring that transferred urban [Kurdish terrorist organisation] PKK sympathisers to the mountains, to the terror camps,” Nationalist Movement Party (MHP) leader Devlet Bahceli, who heads up the ultra-nationalist junior coalition partner of President Recep Tayyip Erdogan’s Justice and Development Party (AKP), said on June 22.

So that’s alright then. It was okay to murder her and then torture her dead body.

Even Sedat “The Botox” Peker, a paramilitary gang leader (as described in information provided by the interior minister of Turkey), was on June 17 moved to tweet. “My dear friends, unfortunately, in the coming days, we will experience much bigger attacks than this provocative attack on the HDP’s Izmir office.”

It is hard to evaluate in Turkey who is a criminal gang leader, who is a political party leader, who is a minister and who is the president. And, there is no need to be the leader of a paramilitary gang within the Turkish state to see what is coming next.

On May 28, we noted here, in the Istanbul Blog, in a story entitled “Turkey entering an era of violence”: “Erdogan: tired, old, the squanderer of a lot of domestic and international ground. But he still has the army, the police, paramilitaries...”

The observation was made after Erdogan openly threatened Iyi Party leader Meral Aksener after a mob attack against her, saying: “This is a first. There is more and more to come. … These are your good days.”

This is how it works in Turkey. If there is a mob attack against Turkish politicians, next comes a brutal murder to intimidate Kurdish politicians.

If some Turks are slapped to the face, next comes a heavy bombardment from military jets on Kurds’ heads.

The blood coincidentally ran three days after Erdogan finished up his business at a Nato gathering in Brussels, meeting Joe Biden & Co to secure the transactional relationships that mean he can carry on representing himself as Turkey’s legitimate, Western-endorsed leader.

On June 19, two days after the brutal death of Poyraz, Turkey’s president deigned to say: “We are condemning this provocative assault and will do so in possible attacks in the future.”

We can expect Erdogan’s neverending condemnations? How humbling, clearly a time to show our gratitude.

The expectation from Erdogan now is for a similar scenario to that that was staged after his AKP lost its parliamentary majority in the June poll of 2015. Turkey endured a bloody period.

So far, this has not come about, but why should even a single person be murdered amid the political tensions? Why should such killings be expected?

Some relatively minor events (compared to the slaying of Poyraz) events are, meanwhile, also happening on a regular basis.

Bahceli, it seems, is also among those who anticipate violence in the coming days. He said on June 29: “I warn everyone, a much more slippery, chaotic, complex period is ahead of us.”

The murder suspect Gencer’s Instagram account shows him toting guns in Manbij, Syria. He told police that he had been to Manbij as a health care worker in 2020.

“The Instagram photos—a man carrying an M-16 [some gun, a big one for serious wars] at a camp claimed to be in Syria and making the [far-right Grey Wolves] sign—indicate that this man was trained at an incubation centre,” HDP MP Garo Paylan told Halk TV.

Bahceli denied that the gunman had any links to the MHP.

“This is a fascist attack… It indicates the presence of an illicit, paramilitary formation. … There are many rumours and all of them should be very carefully investigated. Remember the murder of Hrant Dink [the Armenian-Turkish journalist killed in 2007], which was initially presented as a lone wolf crime by a 17-year-old but later revealed a dark web that touched the depths of the state,” Murat Bakan, an MP of the main opposition Republican People’s Party (CHP), said during another Halk TV appearance.

The CHP still believes that this is the same republic that it founded. Its rhetoric suggests that some so-called deep state or criminal gangs within the Turkish state commit the crimes. However, the CHP’s republic is history now and let’s remember it also amounted to a criminal enterprise, as all states do (Okay, the CHP republic was at least a “state”, not a pure “gangland” as we have right now).

1- The party building and street were under the surveillance of law enforcement officers 24 hours a day, but the murderer was able to carry out a reconnaissance of the HDP Izmir Provincial Organisation building for months and carry out the attack afterwards. How could that be?

2- How could the murderer enter a building under the surveillance of law enforcement with a gun case and special gloves?

3- Has the National Intelligence Organization (MIT) been asked about whether it was informed about the coming attack and the motives behind the attack? If MIT had information about the attack, why was the HDP Provincial Organization not informed? Why weren't any measures taken?

4- By whom was the assailant trained, equipped and financed?

6- Though the murderer posted photos with weapons and several messages with murder threats on social media, he was not detained. Why?

7- Is it true that the perpetrator was assigned to work as a health worker in Syria? If that is true, what procedure was followed in assigning him to work there? Which institution made this assignment?

8- Are the people sent to Syria to work as health workers also given weapons training? If yes, who and which organisations give this training? Will the official papers assigning the murderer to work in Syria be shared with the public? Considering the photos that he shared on social media, did this person participate in the conflicts in Syria?

9- What is the relation of the murderer to [private security contractor] SADAT [International Defence Consulting Construction Industry and Trade Inc]?

11- Have the bank accounts of Onur Gencer been examined?

13- Does the Izmir Security Director know Onur Gencer? How could he know that the assailant was “a person of unsound mind” while the perpetrator had just been detained and not yet interrogated?

14- How could perpetrator Onur Gencer delete his social media posts while in detention? Did the law enforcement officers allow him to use his phone? If not, who used his social media account? Who aided him?

15- It has been reported in the press that the murderer was still on duty at Izmir Kemalpasa Public Hospital. The Governor's Office of Izmir stated that he had resigned from public service. Will you share the official documents about this issue with the public?

16- How many people, apart from Onur Gencer, participated in the attack? Who aided the perpetrator? Who are the instigators of this political murder?

17- While there were still so many questions and answers to be explored, the murderer was not held in detention for even 24 hours; he was put behind bars in a rush. What was the reason for this?

18- Why was a statement not taken from someone at the HDP Provincial Organization?

19- The slaying has led to public outrage. However, law enforcement officers tortured citizens protesting against the brutal attack as they took them into custody. Does this attitude mean rewarding the murderer?

20- Why has the Interior Minister made no statement on the attack in the HDP Izmir Provincial building and the murder of Deniz Poyraz?

ISTANBUL BLOG: Turkey’s official inflation – nothing if not a head-scratcher