ISTANBUL BLOG: No time for a hard parp on the trumpet 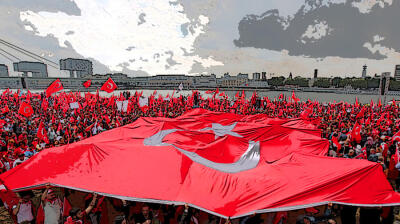 The official growth figures might be seen as a shot in the arm, but, beware, the Erdogan administration is getting on with the only economic policy it knows: pumping in credit. Hyperinflation looms.
By Akin Nazli in Belgrade March 1, 2022

With the murderous events unfolding in Ukraine, this is no time for giving it large on GDP growth figures. More’s the shame for Turkish officials who on February 28 rolled out 11% for 2021, the best performance seen in a decade. Stop right there, of course, as we add the usual caveat—this is the official growth figure as given by that highly challenged outfit, the Turkish Statistical Institute (TUIK or TurkStat). It is now several years since a handful of analysts started querying the methodologies of the dear TUIK, and sought answers are not yet forthcoming.

But no matter! Let’s play dumb, assume everything is as it should be, and line up with Turkish finance minister Nurettin Nebati to happily determine that 11% is the best 2021 growth performance found across the G-20, EU and OECD universes (Might Mr Nebati be familiar with Across the Universe by The Beatles? We’d like to invite him to sing the chorus).

Feeling blithe? Call them baseless inferences if you will, or won’t, but to fortify your journey with Turkey’s impressive growth data, you can go here, here, here and here. Jai guru deva, om.

But seriously. If you use macroeconomic statistics in real life, avoid planning or pricing based on TUIK data.

On our tipping sheet, we wrote down an expectation of a plump 15% for Turkey’s official GDP growth for 2021. The Erdogan regime, alas, was not so bold as to release it, perhaps constrained by the less-than-stellar figures put out by peers.

For boldness, you can take it from veteran watchers of the regime that Turkey’s economic activity actually has no connection with the official growth figure. As things stand, mainstream forecasters are writing in 3-3.5% for the 2022 growth release. But it’s early days, the figure is always jacked up as the year progresses. For 2021, they began in the 4-5%s and ended in the 10%s.

For 2022, the Erdogan administration’s minimum expectation is hovering around 5%, as per usual. The “public bidding” will continue right through to March 2023 when the 2022 figure will be published. Provided Erdogan remains sat on the throne.

When it comes to pesky reality, monetary conditions became tighter in Turkey from December 20. Much economic activity has come to a near halt.

Europe (take “Europe” as “Turkey’s exports”) has also endured a slowdown so far this year. Tightening pressure in the face of booming inflation is now also haunting Europe.

The Erdogan management is, meanwhile, getting on with the only economic policy it knows: pumping in credit. Under current conditions, this won’t help. It will simply fuel the exchange rate and, as a result, hyperinflation.

Since the Putin regime shook up global markets by launching a full-blown invasion of Ukraine on February 24, Erdogan’s officials have been struggling to keep the USD/TRY pair below the 14-level.

The impacts of “geopolitical tensions” in the financial markets generally prove short-lived. Under normal conditions, to produce another shock in the markets, a game-changer, such as a Russian attack outside of Ukraine or some real enforcement imposed on Russia (perhaps no gas or oil exports, or absolutely no access to SWIFT in the global payments system) would be required.

Additional tightening will be indispensable in the coming days. If there was no war to point to, the real reason, namely the Fed’s upcoming tightening, would be on the table. And quite rudely so.

Wars are good for the system since they help distract the attention of the toiling masses. Fear is a basic instinct of the living organism. It is an indispensable tool in herding the labourers. As the global system is struggling, losing its moorings, fear rains down in the form of pandemics, wars and more, which is on the way.

The global system is losing its moorings—God save the Queen! (A fascist regime.)

In January, Turkey’s trade deficit boomed. It will remain elevated in February and March. The government has again been circulating prospective “tourism revenues” as the big cure for Turkey’s ills.

Each year, the same stories circulate at the same time. The problem is that the government is found believing its own flawed stories.

Up to 2018, the Erdogan regime won through on all its big gambles. Since that year, it has lost them all.

On the global front, tension is growing over the upcoming monetary tightening. Additionally, the war that was sought by the global system has been served up by the Putin regime on a silver platter in Ukraine.

It is too early to drive on for some conclusions as how this war business will evolve is as yet unknown.

Right now, there is a war (not a clash, a military operation, or anything else, but a real state against state war) in Ukraine and this is a war under the global media’s full-on focus, which means a great deal of ‘noise’ and manipulation.

It is a cliché, but the reality is that the first casualty of war is the truth. So, it is time to avoid jumping on all information presented by the media.

It is also time for the media mongers to make hay, throwing out sensational headlines with lots of “mays,” “mights” and “coulds”. For instance: “Turkey’s economy may feel the heat with the Russian offensive.”

A few months ago, it was Afghanistan. Currently, you would think, no woman and no child suffer in Afghanistan.

We shall see how long the media’s attention on Ukraine lasts before our ultra-humanist and ultra-sensitive newsrooms turn something of a blind eye to people suffering under the Russian invasion.

February 24 was a real shock. The expectation was for a limited invasion in the Donbas region (the southeastern red region below) but the Russians are currently invading the whole of eastern Ukraine. (See live map here.)

The red denotes the Russian armed forces. In Georgia, Russia invaded Abkhazia and South Ossetia in 2008. The Ukrainians seem to be aiming to defend west of the black line, while conducting guerrilla warfare in the east.

However, even though this conflict has already gone far beyond expectations, it is still a regional clash. World War III will not break out in Ukraine. This would be extremely stupid as the Biden administration has not even managed to get round to its real task, a task called China.

Rather than spending their energy on a world war in Europe, the assorted protagonists can go directly to Beijing and crown Xi Jinping the new global hegemon.

Crowded China has posed the biggest threat to the Russian empire throughout history, even if the global media loves to paint Russia and China as allies. The Russian empire was rather a US ally in the first two world wars.

The US, with the UK up on the bandwagon, control the English-dominated world media. Thus, the media sleeps with Ukraine and wakes up with Ukraine.

Worrying the common man with the Russian bugbear actually makes for stale fodder, but a real war at the door will do the job for now in quelling the discontent. Otherwise, it would be time to redistribute some wealth and economic surpluses.

As of February 28, Ukraine is resisting. If it lasts much longer, Putin will be in trouble.

The Russian establishment never reads the fable of “The frog and the ox.” Next, they descend into intra-state clashes (cf. 1989 or 1917).