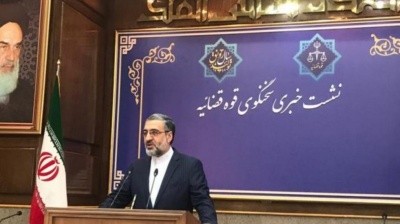 The deterioration in relations between Iran and the UK gathered pace on January 14 as the Iranian judiciary described the UK’s ambassador to Tehran as “persona non grata” and called for his expulsion.

The attitude expressed towards the ambassador, Rob Macaire, is clearly linked to indignance in Iran that the UK, under the new Boris Johnson government, is increasingly falling into line with US President Donald Trump’s hostile policy towards the Islamic Republic and acting as something of a lapdog as London seeks a trade deal with the Americans to counter setbacks that will be caused by the upcoming British exit from the EU.

The call for Macaire to be expelled came on the same day that the UK, France and Germany activated the Iran nuclear deal dispute resolution mechanism and Johnson said in a TV interview that the accord should be replaced with “a Trump deal”. 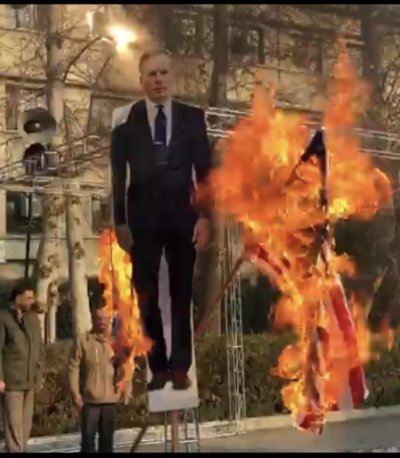 Placards of the UK ambassador were burnt on the streets.

Macaire at the weekend attended a Tehran vigil for the 176 people who lost their lives when on January 8 an Iranian missile gunner downed Ukraine International Airlines (UIA) flight PS752, apparently because he assessed it could be an incoming American cruise missile and because of a communications breakdown was unable to contact superiors for a “trigger” decision on his conclusion. Protests against the Iranian regime had broken out in the city over the tragedy and failure by Iran to quickly own up to what happened and, according to Macaire, when chanting broke out at the vigil he left. After leaving, he visited a barber’s shop, where he was arrested. After his explanations, he was quickly released but on January 15 placards of Macaire were burnt on the streets and judiciary spokesman Gholamhossein Esmaili accused the diplomat of “interfering in [Iran’s] internal affairs in breach of diplomatic conventions.

Not thought to be formal declaration

“Under international law, such a person is a ‘persona non grata’. The people expect the person to be expelled and that is also what international law calls for,” Esmaili said, according to state media. However, Esmaili’s words were not thought to amount to a formal declaration from Iran’s leadership that would automatically lead to an expulsion.

Iran’s Islamic Revolutionary Guard Corps (IRGC), the hardline military organisation that defends the regime, has taken responsibility for the shooting down of the aircraft, which occurred about five hours after Iranian missiles were fired at US forces stationed in Iraq in retaliation for the American assassination of top Iranian Major-General Qasem Soleimani, and while Iran’s armed forces were on high alert for reprisals. January 15 saw some bickering over claims that the IRGC had asked the government—dominated by pragmatic moderates rather than hardliners—to shut down Iranian airspace for a period that would have covered the time the airliner was brought down, but Aniseh Bassiri Tabrizi, a research fellow at London’s Royal United Services Institute, told the Guardian that there had nonetheless been unusually little public sniping between competing factions and institutions inside the Iranian government over the incident. “There has been a focus on unity,” she said.

The day also saw Iran announce the arrest of a person said to have filmed footage showing the Ukrainian passenger plane being shot down with a missile. It is believed the person being detained will face charges related to national security. The footage was widely viewed on social media. The BBC reported an Iranian journalist based in London who initially posted the footage as insisting that his source is safe, and that the Iranian authorities have arrested the wrong person.

The Iranian judiciary, meanwhile, disclosed the arresting of around 30 protesters who took to the streets after authorities admitted that the plane was accidentally hit by an Iranian missile. “Around 30 people have been arrested for taking part in illegal gatherings ... We have tolerance towards legal rallies,” said judiciary spokesman Esmaili, the semi-official Tasnim news agency reported.

President Hassan Rouhani said his country's investigation into the shooting down of the aircraft would be overseen by a "special court". "This will not be a regular and usual case. The whole world will be watching this court," he said in a speech. Rouhani also stressed that the "tragic event" should not be blamed on one individual. "It's not only the person who pulled the trigger, but also others who are responsible," he said.

Responding to Europe’s move to initiate the nuclear deal dispute mechanism, the US top envoy for Iran, Brian Hook, told Reuters Washington supports Europe’s action but would like to see Europeans join the US in its efforts to diplomatically isolate Tehran.

Triggering the dispute mechanism is the strongest step the Europeans have taken so far to enforce an agreement—unilaterally abandoned by the US in May 2018—that requires Iran to curb its nuclear programme. Tehran has taken the step of saying it will no longer abide by the accord’s uranium enrichment limits because it is not being provided with any assistance by the European nuclear deal signatories to protect its economy from the US “economic war” being waged on Iran with crushing sanctions.

“We do support the Europeans initiating the dispute resolution mechanism. ... What the president has asked for is for them to leave the deal and join us in our diplomacy to get a new deal,” Hook said in an interview.

Hook added that the US was “very pleased” with UK PM Johnson agreeing with the US assessment, adding that there wasn’t much left of the Iran nuclear deal.

“We hope that the Europeans will continue to hold Iran accountable. We’d like them to join our diplomatic efforts, of diplomatic isolation and economic pressure which are the conditions to get to a new and better deal,” said Hook.

Iran dismissed the decision by European states to trigger the dispute mechanism, saying it was a “passive” action. However, Tehran said it was ready to consider any constructive effort to save the accord. “The Islamic Republic of Iran, as in the past, has complete readiness to support any [act of] goodwill and constructive effort to save this important international agreement,” said Iranian Foreign Ministry spokesman Abbas Mousavi.

The ministry was yet to respond to a statement from Russian Foreign Minister Sergei Lavrov that Russia was prepared to help launch a new round of dialogue between Iran and the US.

Also announced on January 14 was the confirmed planned attendance of Trump at the World Economic Forum’s annual meeting in Davos next week. Iran’s Foreign Minister Mohammad Javad Zarif has cancelled his scheduled appearance, organisers of the gathering of political and business leaders added. The event is being held under the banner “Stakeholders for a Sustainable and Cohesive World”.