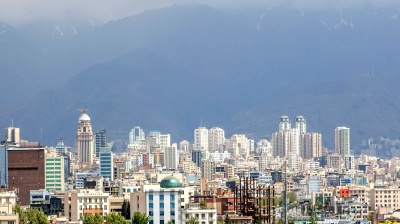 Tehran woke up on November 5 to the toughest sanctions ever imposed by the US on the Iranian economy. / ninara.
By bne IntelliNews November 5, 2018

“We are in a war situation,” declared Iran’s President Hassan Rouhani on November 5 shortly after Washington’s heaviest sanctions kicked in.

As Iranian state television aired footage of air defence systems and anti-aircraft batteries in military manoeuvres taking place across a vast stretch of the country’s north, the president—who vowed that Iran would breach the sanctions—was also reported by The Associated Press as saying: “We are in the economic war situation. We are confronting a bullying enemy. We have to stand to win.”

The second-phase sanctions target Iran’s oil, gas, petrochemical, shipping and banking industries, dealing a potentially crippling blow to an economy already plunged into recession and crisis by the first-phase sanctions that took effect on August 7. Those sanctions have for three months been undermining the country’s automotive sector, purchase or acquisition of US banknotes, trade in gold and other precious metals, graphite, aluminium, steel, coal, and software used in industrial processes, transactions related to the Iranian rial (IRR) and activities relating to Iran's issuance of sovereign debt.

The sanctions bring to an end all the economic benefits the Barack Obama administration granted Tehran after the US and five other major powers, along with Iran, signed the nuclear deal in late 2015. The accord is supposed to shield Iran from crippling sanctions in return for the Iranians limiting their enrichment of uranium to close off their potential road to the development of a nuclear weapon. But, despite the strong protests of all the other signatories—Iran, the UK, France, Germany, Russia and China—and with the vocal backing of Israel, Donald Trump unilaterally withdrew the US from the multilateral pact in May, determined to force further concessions on Iran’s role and activities in the Middle East.

Central to the new sanctions is an effort to gradually force Iran’s lifeline oil exports to zero. But in his latest comments, Rouhani, a pragmatic, centrist politician under pressure from hardliners to fight back hard against the American aggression, said: “Today, Iran is able to sell its oil and it will sell.”

The US initially pushed hard to rapidly bring crude shipments down to zero, but on November 5, US Secretary of State Mike Pompeo confirmed that 180-day exemptions allowing for the continued importing of Iranian oil had been granted to eight countries—China, India, Italy, Greece, Japan, South Korea, Taiwan and Turkey. However, the waivers have been granted on the condition that the countries endeavour to gradually end the purchasing of crude from Iran.

Inflation "at more than 270%"
Some internationally renowned economists, such as Steve Hanke at Johns Hopkins University in Baltimore, have estimated that Iran’s annual inflation rate is running at more than 270% compared to the official claim of just 13.5%.

Pressure from the sanctions has also led to the collapse of the rial. By late afternoon trading in Tehran on October 5, a dollar was selling for IRR148,000 on the free market, compared with IRR40,500 to $1 a year ago. Pompeo said the sanctions had so far persuaded more than 100 big foreign companies to exit Iran.

The US says the sanctions are not aimed at regime change, but at throttling the Iranian economy to the point where the country —a parliamentary democracy vetted and supervised by a theocracy headed by an unelected supreme leader—will be forced to radically change its policies, including its support for proxy militants in conflict-torn countries of the Middle East including Yemen and Syria. However Trump’s personal lawyer, Rudy Giuliani, and White House National Security Advisor John Bolton have both made public statements supporting the overthrowing of Iran’s ruling establishment.

The EU’s economic affairs commissioner spoke out against the resumption of sanctions on October 5. “The European Union does not approve of it,” Pierre Moscovici told franceinfo radio.

On November 4 it emerged that no country has yet volunteered to host the EU mechanism designed to facilitate payments for Iranian exports that would not be exposed to the sanctions regime.

The EU had said a special purpose vehicle (SPV) would be “symbolically ready” and legally in place by the eve of the second-wave sanctions, but would not be operational until early next year. But the lack of a host country might well delay the establishment of the mechanism, expected to be opaque to prevent the US applying secondary sanctions to parties using it to conduct business with Iran.

A senior French diplomat told Reuters that there was no way any trade with the mechanism could be conducted before the end of 2018.

For now no other countries, including China, would be part of it although that could change over time, the EU has previously said.

Pompeo has said he does not believe the SPV will be able to secure much significant trade for Iran, adding that any US businesses found to be trading with entities using the mechanism would themselves be in hot water.

Iran has said it could leave the nuclear deal if the EU failed to secure the Islamic Republic enough economic benefits from staying in it. But Iran has been encouraged by European efforts to stand by it in the face of US hostility.

Iranian foreign ministry spokesman Bahram Qasemi said in a press briefing that Tehran was “in regular contact with other signatories of the nuclear deal” but that “setting up [a] mechanism to continue trade with the European Union will take time”.

Placing a question mark over Russia’s commitment to assist Iran in the face of the swingeing sanctions, Russian state-owned oil producer Zarubezhneft on November 2 cancelled projects in Iran saying it feared it would lose foreign currency revenue if it was hit by secondary sanctions triggered by continuing in business with the Iranians.

bneGREEN: Germany’s nuclear crunch challenges green future
54 minutes ago
Entain buys Croatia’s SuperSport as it expands into Emerging Europe
3 hours ago
Government claims three quarters of foreign companies in Russia are still working
1 day ago
Moldova says it won't be able to make next payment to Gazprom
1 day ago
Russia resumes oil supplies to Slovakia and Hungary but imports to Czechia remain halted
1 day ago