Soleimani was killed by a US drone strike at Baghdad Airport on January 3 after Trump gave the go-ahead for the operation. 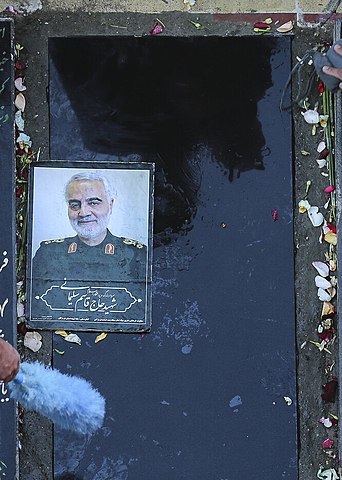 "It was possible to identify 36 people who participated in the preparation of, and were involved in the matter of, the assassination of Qasem Soleimani, among whom there are political and military figures of the United States and other countries," the news agency quoted Tehran’s prosecutor Ali Mehra as saying.

Mehra reportedly added that judicial authorities have adopted a resolution on bringing those people to justice and declaring Red statuses through Interpol, which would mean law enforcement forces around the world would facilitate the search for and capture of the suspects.

He said the individuals, all of which are now also the subject of Iranian arrest warrants, were accused of "murder" and "terrorism," adding: "At the top of the list is US President Donald Trump."

Claimed he was a terrorist

In moving to kill Soleimani, the Trump administration claimed that he was a terrorist partly because for around two decades he worked with Iran-aligned militias across the Middle East on operations that resulted in the deaths of American and British troops, sometimes with the use of improvised explosive devices (IEDs).

In late January, Iran said a US threat to kill the successor to Soleimani was a sign of “America’s targeted and governmental terrorism”.

On January 23, the US special representative for Iran, Brian Hook, was quoted by Asharq al-Awsat newspaper as saying Soleimani’s successor as commander of the IRGC Quds Force for Iranian military operations abroad, Esmail Qaani, would suffer the same fate as his predecessor if he followed a similar path by killing Americans.

He added in a Davos, Switzerland interview with the publication that Trump had long made it clear “that any attack on Americans or American interests would be met with a decisive response”.

“This isn’t a new threat. The president has always said that he will always respond decisively to protect American interests,” Hook said. “I think the Iranian regime understands now that they cannot attack America and get away with it.”

After his appointment, Qaani, as reported by Reuters, said that he would “continue in this luminous path” taken by Soleimani and that the goal was to drive US forces out of the Middle East, Iran’s long-stated policy.

On January 20, Iran’s Fars News Agency reported Qaani as telling a Tehran audience: "They hit General Soleimani in a cowardly act, but there are freedom-seekers across the world who want to revenge for him with God's help, and God willing, we will hit his enemy chivalrously. Our enemy understands no language but force and therefore we should stand against them strongly."

Following the death of the general, an Iranian MP said the people of the commander’s home province Kerman were willing to pay a $3mn bounty to anyone who killed Trump.

The aftermath of the assassination also saw the IRGC’s aerospace division commander say that four US military bases in the Middle East were used to deploy aircraft and drones involved in the attack that killed Soleimani, including two bases in Iraq and another in Kuwait.

“Most of the drones” took off from Kuwait, Amirali Hajizadeh told Iranian state television. He did not say if Iran believed a drone from Kuwait was ultimately responsible for the hit on Soleimani.

Death of China-to-Russia cargo transit routes means it’s all aboard for Kazakhstan
bneGREEN: Iran records one of the hottest days on Earth ever
Turkmenistan: Masks off