Hungary to finance Fudan University with €1.4bn from Chinese loans 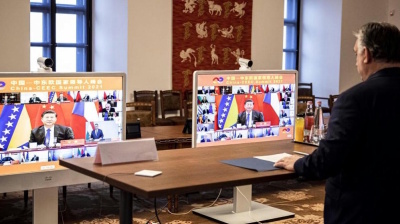 Hungarian PM Viktor Orban in a videoconference with Chinese President Xi Jinping at the China-CEEC summit in February 2021. / Direkt36
By bne IntelliNews April 7, 2021

The Hungarian government’s decision to allow Shanghai-based Fudan University to set up a campus in Budapest in late 2019 raised eyebrows in EU capitals. It came at a time as Viktor Orban waged war on the private university founded by George Soros, which later moved its base to Vienna.

The project is advancing at full-steam, according to government documents unveiled by investigative news site Direkt36. Fudan University’s first campus outside of China is set to be completed by 2024.

The Chinese government regards it as a leading project in bilateral relations, and it falls in line with the Hungarian government’s aspirations to foster strategic ties to China as it strives to become a hub for Chinese investments and know-how in the CEE region.

The construction of Budapest campus will be excluded from EU procurement rules, subject to a Chinese-Hungarian bilateral agreement, similar to the Budapest-Belgrade upgrade or the €12.5bn expansion of the Paks nuclear power plant.

According to government documents, China State Construction Engineering Corporation (CSCEC), the largest construction company in the world by revenue, will be in charge of the HUF500bn (€1.4bn) project.

This is more than the entire funding of Hungary’s higher education sector in 2019.

CSCEC made a HUF338bn offer for the construction of 520,000 sqm facility, which was below the government’s initial HUF540bn target. However, the Chinese offer does not include setting up roads and parks.

Hungary would take out a huge Chinese loan for the construction based on the model of the Budapest-Belgrade railway investment, according to government documents. Hungary will finance 85% of the costs of the €2.1bn railway upgrade, the largest railway construction project in Hungary, from a loan provided by Chinese Eximbank and 15% from own sources.

As for Fudan University, Budapest would chip in with HUF100bn while the remaining more than HUF450bn would be lent by the China Development Bank.

The 10-15 year loans would carry a maximum interest rate of 4.5% for yuan loans and 1.9% for euro loans, according to the preliminary offer. The loan would be repaid in full by the Hungarian state through the trust fund.

The annual cost of operation would cost Hungary cc. HUF10bn-15bn, according to documents.

Fudan is among the world’s top 40 universities, according to QS World University Ranking, Hungary’s innovation and technology ministry said. There will be 4,500 teachers and more than 30,000 students at the Budapest campus.

Fudan is not only an elite university but also an important tool for gaining political influence by China, Direkt36 writes. It is actively cooperating with Chinese intelligence and at least a quarter of teachers and students are members of the Chinese Communist Party.

The Mariupol siege is over as the last Azov defenders surrender
4 hours ago
Kyrgyzstan: Eccentric health minister fights for his job amid claims of corruption and bullying
18 hours ago
Azov commanders have remained behind in the Mariupol steelworks to continue the fight
19 hours ago
Russia hopes Chinese carmakers will help revive Moskvitch brand
19 hours ago
Russia may leave the WTO and WHO. In practice, it never really joined
20 hours ago