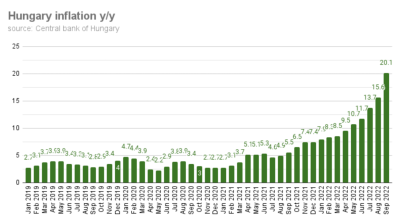 Consumer prices rose to a 26-year-high in September. / bne IntelliNews
By Tamas Csonka in Budapest October 11, 2022

Headline inflation in Hungary accelerated to 20.1% y/y in September (chart) from 15.7% in the previous month, driven by higher food and household energy prices, the Central Statistics Office (KSH) said on October 11. The figure, the highest since 1996 December, was 0.3pp over the median forecast. Hungarian assets extended their slide after the release of the data, with the forint sinking to a new low and the benchmark ten-year bond topping 10%.

The KSH calculated the impact of scaling back energy subsidies in the September data, which lifted the index 4.1% from August.

The government set a price cap on half a dozen food staples before the April election, but the price of other items shot up due to the higher import prices through a weaker forint and retailers passing windfall taxes to consumers.

According to the latest CPI data, more than 40% (61) of the 140 main group of goods and services in the KSH inflation basket rose by more than 20% y/y and in 75% of case, annualised price growth exceeded 10%.

Core inflation, which excludes volatile fuel and food prices, accelerated from 19% in August to 20.7%. CPI calculated with a basket of goods and services used by pensioners was 21.9%.

In light of today's data, average annual inflation could reach 14% in 2022 and due to carry-over effects, it is set to rise to 15% in 2023, ING Bank analyst Peter Virovacz said.

The bigger concern for monetary policy is the continued depreciation of the forint, which will indirectly add to future inflationary pressures and risk meeting the MNB’s revised inflation target, he added.

The central bank is expected to continue to focus on improving monetary transmission and tightening liquidity. The MNB ended its 16-month tightening cycle two weeks ago and shifted to other tools to drain excess liquidity from the market, but so far that did not convince the market as the forint continued to shatter new records. On Tuesday, the EUR/HUF was quoted at 429.6 and the USD/HUF at 442.5 in intraday trading. The 10-year bond yield was quoted at 10.25%.

Economists expect further acceleration of inflation, although the pace of growth will slow down in the coming months.

The unwinding of the price cap on fuel, extended until the end of 2022, could trigger inflationary shocks. For this reason, the cabinet could decide to postpone lifting it until mid-2023, according to ING Bank analyst Peter Virovacz.

Overall, inflation projections are skewed upwards due to the risk of repricing as companies face surging energy costs and the impact of drought on unprocessed and processed food prices. The risk of a wage-price inflation spiral picking up is growing as many companies are offering extra payments for staff to cover the higher living costs.