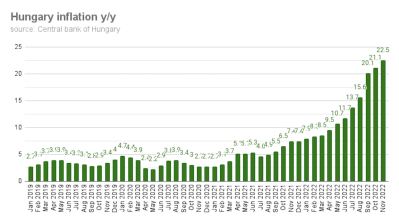 Consumer prices in Hungary rose 22.5% y/y in November (chart), accelerating from a 21.1% increase in the previous month on higher household energy and food prices, the Central Statistics Office (KSH) said on December 8.

Analysts raised their full-year inflation forecasts after the report, which still does not include the impact of the phase-out of fuel price caps.

Inflation adjusted to a pensioner’s basket of goods and services was above the headline data at 25.2%.

The government earlier rolled back prices for a number of staples, including pork, cooking oil and flour, in an effort to dampen inflation. Household energy prices increased 65.9%, lifted by new consumption restrictions for regulated utilities prices in force from August 1.

The data still reflect the impact of a 480/litre cap on motor fuel prices introduced on November 15, 2021. The cap was scrapped on Tuesday,

Prices of spirits and tobacco products increased by 13.8% and clothing prices rose by 8.0%.

Food prices contributed 0.8pp to the increase in headline inflation, while fuel prices reduced the rise by one-tenth of a percentage point because of the base effect, the Hungarian National Bank said in its monthly assessment. Indicators measuring households' inflation expectations showed "unusually high volatility" and continued to rise compared to the previous month, it added.

Analysts raised their full-year inflation forecasts after the report, which still does not include the impact of the phase-out of fuel price caps.

The phase-out of fuel price caps is expected to boost the headline figure by 2-2.5% and next month inflation could peak at 26%, Magyar Bankholding analyst Gergely Suppan said.

He warned of the impact of rising energy prices feeding through the supply chain to consumer prices, a major upside risk. The bank upped its annual average inflationary forecast for 2022 to 17.5% from 14.6%.

The implication of the inflation report on monetary policy is that the MNB will have little room to cut the 18% one-day deposit rate, which has become the effective rate from mid-October.

The outcome of the release of EU funds will also be vital before the central bank could start thinking about easing rates.