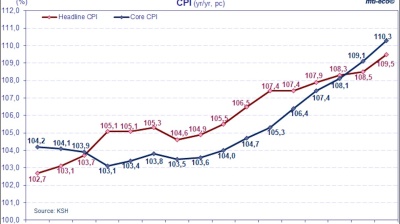 Headline inflation in Hungary accelerated to 9.5% y/y in April, from 8.5%, while core inflation edged up from 9.1% to 10.3%, according to data from the Central Statistics Office (KSH). In a month-on-month comparison, CPI was 1.6%, well above the 1.3% consensus, the highest rate of growth since 2012, when the government hiked VAT from 25% to 27%, the highest in Europe.

In a monthly analysis released after the publication of the KSH data, the MNB said the increase in headline inflation was mainly driven by higher prices for core inflation items. Vehicle fuel prices contributed 1.4 pp to CPI.

The KSH data shows a broad-based increase in prices, as 50% of the consumer basket items reported double-digit growth in April on an annual basis. Consumer durable prices rose 11% y/y and 1.7% m/m and that of services by 6.3% y/y and 0.7% m/m.

Food prices became 15.6% dearer as the price of bread and poultry both jumped 29.5% and dairy products prices climbed 22.5%. The government rolled back prices for a number of staples, including pork, cooking oil and flour, to mid-October levels from February 1 in an effort to dampen inflation.

The government estimates that these measures shaved 2pp off the headline figure and the fuel price cap another 1pp.

Households have perceived a 22% increase in prices, compared to the official inflation figure of 9.5% in April, economic researcher GKI said, citing factors in data collection and basket of goods included in the KSH statistics, but also the surge in basic foodstuffs.

The war in Ukraine is generating significant inflationary pressure thanks to higher raw material, transport and energy prices, coupled with higher cost of labour, which is increasingly feeding through to producer prices, said ING Bank analyst Peter Virovacz, who added that the range of prices affected is "extraordinarily wide".

He said headline CPI could peak "over 11%" in the third quarter, even if price caps remain in place. He put average annual inflation in the double digits.

The labour market remains tight, resulting in massive wage pressures, and the government’s expansionary fiscal policy before the election is also building up inflationary pressure, other analysts warned.

The forint strengthened against major currencies after the release of the inflation data. The EUR/HUF moved from 384 on Monday to 378.5 on the assumption the National Bank will continue its tightening policy.

In view of the monthly 1.6% increase, ING Bank revised its rate targets for the one-week deposit rate from 8.25% to 9%. This suggests a further 2.55% rate hike.

Europe’s gas storage on track to meet 80% full by start of heating season
17 hours ago
Kosovo’s population dropped to 1.77mn in 2021 as emigration outweighed natural increase
1 day ago
North Macedonia’s PPI jumps 21.7% y/y in May
1 day ago
IMF says war in Ukraine, inflation and energy crisis pose challenges to Serbia’s economy
2 days ago
Poland’s unemployment rate falls to lowest point since 1990
3 days ago