Freedom of speech is in crisis in Bulgaria, President Radev says 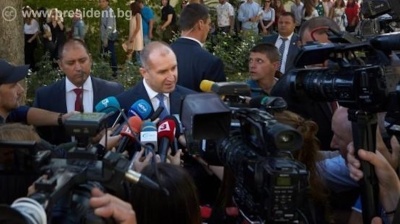 Freedom of speech in Bulgaria is in crisis, President Rumen Radev said on September 16, after a new scandal erupted over an attempt to silence a journalist critical of those in power.

Radev’s statement came after at the end of last week the head of public broadcaster Bulgarian National Radio (BNR) decided to take prominent broadcaster Silvia Velikova off the air, which has caused a storm in Bulgaria as it was seen as yet another attempt to silence journalists critical of those in power, and led to the first five-hour silencing of the broadcaster.

“The freedom of speech is at the base of democracy, it is a fundamental value. Apparently, in Bulgaria it is in crisis,” Radev told reporters.

He added that the silencing of BNR once again confirmed the importance of the questions of who is managing the public broadcasters and how they are managed.

“It is apparent that the state is being ruled via someone’s phone, not through the institutions as is the normal European practice. It is time to put an end to this,” Radev also said as quoted in a statement on the presidency’s website.

He also said the behaviour of BNR’s journalists who have shown unanimous solidarity with Velikova and refused to replace her is a sign of hope.

Bulgaria was ranked in 111th place out of 180 countries in the latest media freedom report from Reporters Without Borders (RSF) – at the bottom among all EU member states and below the Western Balkan countries.

In the past few years, there have been more cases of independent journalists being removed from their positions, and increasing pressure on investigative media and journalists.

Among the most recent cases is an accusation by the prosecution that independent investigative news outlet Bivol.bg was involved in a hack attack that led to a breach of data for more than 5mn people in mid-July. Its owner Assen Yordanov has filed a lawsuit against the prosecutor Evgenia Stankova who said at a press conference that Bivol was behind the attack.

Turkish fintech Figopara, established in 2017, has raised a million dollars in its second financing ... more

The Iranian judiciary has launched an “online court” as a social distancing measure brought in to address the coronavirus (COVID-19) outbreak, CITNA reported on April 23. A press release from ... more