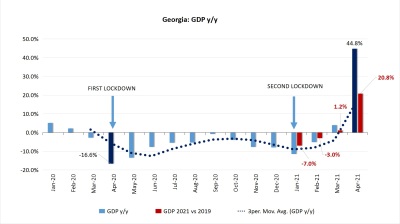 Georgia’s GDP surged by 44.8% y/y in April, according to a preliminary flash estimate from statistics office Geostat. Recoveries seen in both external and domestic demand contributed.

As a result of the stronger-than-expected recovery in April, Georgia's government revised its projection for full-year GDP growth to 6.5% from 4.3%.  It expects even stronger growth, at 6.9%, in 2022.

"This scenario envisages a faster recovery of tourism this year, specifically at the level of 40-45% of 2019. It also means dynamic economic growth in other sectors of the economy. We have clear signs of this in the April GDP growth data, where the economy grew by almost 45% and this growth was spread to virtually all sectors of the economy," said Georgian Finance Minister Lasha Khutsishvili.

The government revised the budget deficit target to 7.1% of GDP and will operate adjustments on the expenditures side as a result.

The outstanding economic advance in April reverses the contraction seen in the same month last year when the lockdown prompted by COVID-19 resulted in the sudden arrest of economic activity. However, even corrected for the 16.6% GDP contraction of April 2020, economic activity seen this April is particularly robust: 20.8% stronger than what was recorded two years earlier in April 2019.

It is equivalent to an annual growth rate of 9.9% over the past two years.

The two-year GDP advance calculated for the first few months of 2021 indicates a gradual recovery from still negative values in the first two months (-7.3% in January and -3.0% in February) to a modest advance of 1.2% in March and 20.8% in April.

Geostat’s estimate took into account recoveries of external and domestic demand as reflected by stronger exports and the turnover of VAT-paying companies.

According to Geostat, the turnover of VAT-paying companies in April amounted to GEL8.44bn ($2.5bn), which is 93% more compared to the same period in 2020 - again as a result of low base effects.

Georgia's exports expanded by 70% y/y to $378mn in April, consolidating the robust 30% y/y advance seen in March to $326mn, according to statistics office Geostat.