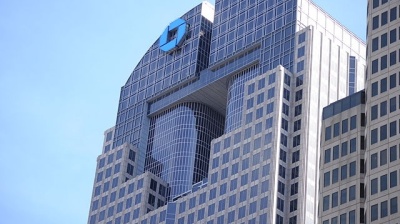 JP Morgan is one of the biggest investment banks in Russia, but it lags its peers in excluding Russian entities from its indices. / Image: Joe Mabel via Wikimedia commons.
By bne intellinews March 8, 2022

Global markets are rushing to remove Russian equity and debt from their indices as all things Russian plummet in value. Yet JP Morgan is trailing its peers, and has so far refused to drop Russian stocks.

Many western investors and companies have been pulling out of Russia and its markets following the invasion of Ukraine on February 24. A combination of prohibitive sanctions, reputational damage and political risk have rendered Russian stocks and bonds “uninvestable”, according to a press release by Morgan Stanley’s MSCI.

In addition to MSCI, America’s S&P Dow Jones has also announced that it will remove all Russian stocks from its indices. Britain’s FTSE Russell Index followed suit, announcing that from March 7, “Russia will be deleted from all FTSE Russell Equity indices”.

Data provider IHS Markit also announced that it will consider dropping Russian Credit Default Swaps from its CDX EM index when a new version of that benchmark is launched on March 21.

JP Morgan will not include new debt options from sanctioned Russian entities in its indices, but has not committed to change existing bond compositions.

However, the bank is reviewing the possibility of removing Russia from its JESG suite of indices from the end of March.

The bank’s indecision means that some investors are left unwittingly supporting the Russian government through its continued inclusion in the indices.

On the other hand, the bank recently informed clients that plans to include Ukrainian local currency government bonds in GBI-EM indices have been postponed “due to the ongoing market disruption.”

One question raised by this indecision is whether Russian debt and equities are still investable. A CNBC report said that ETFs tracking Russian equities have been performing badly since the invasion of Ukraine. The iShares MSCI Russia ETF plummeted by 33.4% in just five days – the worst fall since the fund was set up in 2010.

Meanwhile, the London Stock Exchange was forced to suspend trading of Russian companies after state-backed entities plumbed new depths the week after the war began. Sberbank was trading at around one pence, down 99.7% year on year, while state-owned gas giant Gazprom was down 93.7%.

The situation recalls 2008, when banks refused to mark down Credit Default Swaps because they were holding them. This hid some of the extent of the damage banks were sustaining in the early stages of the financial crisis.