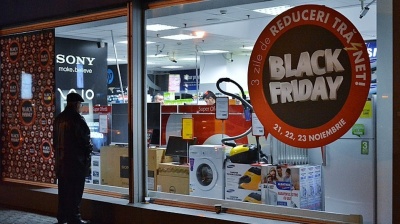 Window shopping ahead of Black Friday at one of Romania's major electronics retailers.
By Iulian Ernst in Bucharest May 9, 2019

Sales of home electronics in Romania declined by 1.7% in the first quarter of the year compared to the same period of 2018, to around €700mn, shows an analysis by GfK.

Notably, the smartphone sales plunged to a quarter of those recorded in Q1 last year, in value terms. This sub-segment prompted the negative evolution of the whole telecom equipment segment, losing more than 74% of its value compared to the same quarter of 2018, with sales of only €53mn.

On the other hand, the phablets category — devices with a display size of more than 5.6 inches that straddle the smartphone and tablet categories — still enjoys “crazy growing rates” of 146.5%, to reach €231mn sales in Q1, GfK commented, which shows that Romanian consumers have moved to wider-screen mobile devices.

The overall market decline was mainly prompted by the weaker sales of telecom equipment (43% of the total market) and IT equipment (14% of the market). The telecom equipment segment shrank by 4.5% year-on-year, to €301mn. It includes mobile and smartphones, phablets, headphones and core wearables, such as smart clocks and Fitbits.

Against the overall decline, sales of major domestic appliances (18.3% of the total market in the period) increased by 11.2% year-on-year. Sales of small household appliances (7.4% of total) also increased, by 3.9% year-on-year. All the other segments contracted.