Exactly what is a fair price for Ukraine to pay for Russian gas?

Russia cut Ukraine off from gas deliveries on June 16 after the emergency talks at the weekend to strike a new price for gas failed. From now on Russia won't deliver any gas unless Ukraine pays for it in advance. The row has come down to numbers: so exactly what would be a "fair" price for Ukraine to pay for Russian gas?

For 20 years the West has been lecturing Russia about the joys of the free market, which we all know works on the basis of supply and demand: prices are set by striking a balance between a punter's desire to buy a product and its availability. However this assumes that there are lots of sellers so the buyer has a choice. That is not true with gas, where Russia has a virtual monopoly over Ukraine's supplies. That's one of the reasons we have governments – to regulate natural monopolies, prevent them from charging economic rents and force them to set "fair" prices. However, that clearly doesn’t work when the buyer is a country and lurking behind this latest gas war is the assumption that Russia is abusing its monopolistic position.

Ukraine finds itself over a barrel because it depends on Russia for between 50% and 75% of its gas needs. The 2009 gas supply contract struck between Moscow and Kyiv was for the delivery of 42bn cubic metres of gas a year (cm/y). In addition, Ukraine produces about 20bn cm/y from its own resources. More recently, Ukraine has cut imports of Russian gas to around 28bn cm/y simply because it can't afford to pay for any more.

Currently, Ukraine is paying $485.5 per 1,000 cm against the $286/'000 cm it was paying under the discounted deal struck between the Kremlin and the now-ousted Ukrainian president Viktor Yanukovych in December. Kyiv had been asking to go back to that discounted price, but in the last week it shifted its stance and said it would accept a more reasonable package of $300/'000 cm in the summer and $385/'000 cm in the winter, while Russian President Vladimir Putin says his "final offer" is a flat $385/'000 cm all year. The gap between the two sides seems pretty small.

Last year Russian newspaper Izvestiya obtained the price list that Gazprom charges its European customers from company execs and published it for the first time. Since then some countries like Lithuania have secured price cuts, but looking at the data obtained by Izvestiya it shows that European prices in 2013 ranged from between the $313/'000 cm for the UK (the least in Western Europe) to $566 for Macedonia (the most). 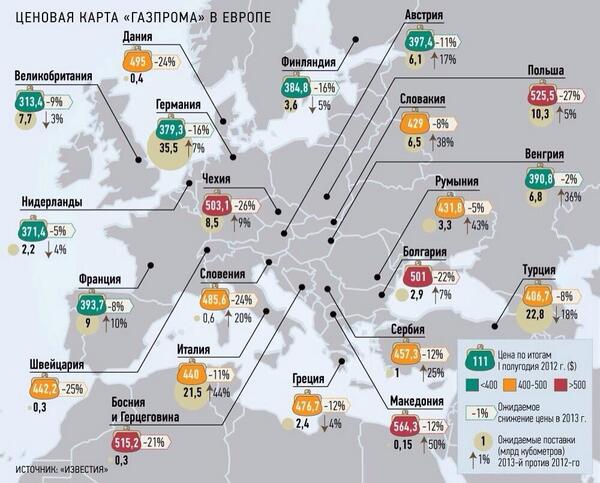 According to this data, Ukraine already pays less than the Czech Republic and Poland as well as most of the former Yugoslavian states. The exception is Belarus, a fellow member of Russia's Customs Union, which pays a mere $175/'000 cm. The $485/'000 cm that Ukraine pays now already puts it into the middle price bracket and $385 would put it into the lower third.

Looking at the chart below on EU energy consumption of Russian gas, it's clear the further west you go the less reliant a country is on Russian gas, simply because pipelines are expensive to build, and as you'd expect, the lower the price of Russia gas. 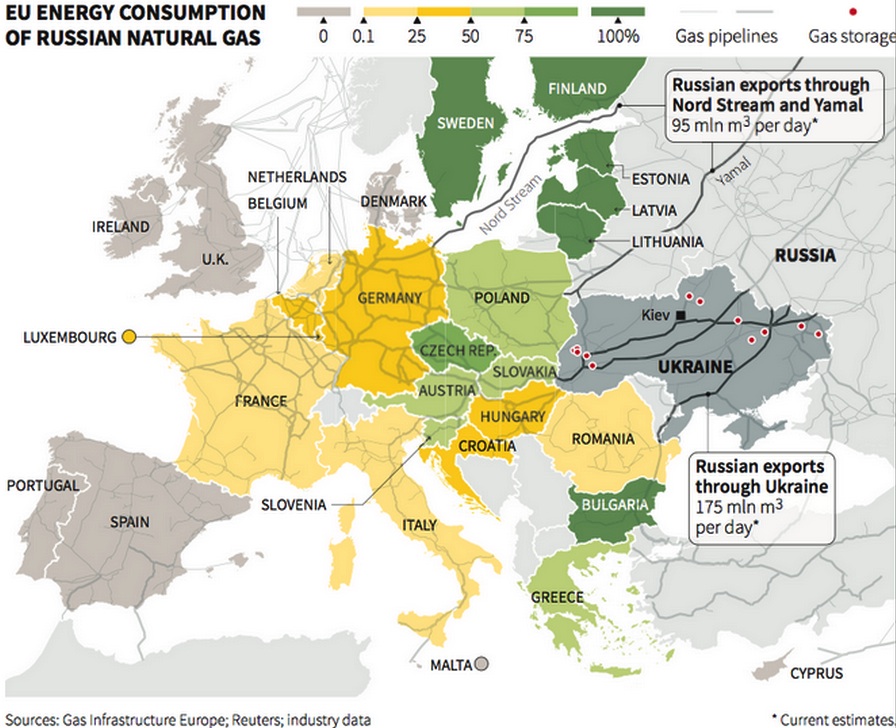 However, Kyiv is asking for an even better deal than the mid-range $385/'000 cm: it wants to pay only $300 during the summer months – which would be the lowest price in all of Europe apart from Belarus – and hike this to $385 in the winter months when demand is highest. That’s equivalent to a further discount.

In Soviet times nearly all the gas storage facilities were built in Ukraine and can hold some 16bn cm of gas – about a quarter of Ukraine's needs and a tenth of Russia's exports to the West. If Ukraine used this storage exclusively for its own use and assuming it imports the full 42bn cm/y it is supposed to under the terms of its take-or-pay 2009 deal, then this represents an average price for gas of $352/'000 cm – in other words the cheapest price for gas of any country in Europe other than the UK and Belarus.

However, the price of gas for Ukraine is only half of the deal on the table. The other half concerns the debts that Ukraine owns to Russia. Gazprom claims that Kyiv owes over $4bn in gas bill arrears and is asking for $1.9bn immediately. Ukraine offered $1bn payment now and is proposing to pay the rest off in instalments.

But on June 16 Kyiv stepped back from admitting that debt and the Ukrainian state energy company Naftogaz filed a motion with the Stockholm arbitration court challenging the 2009 contract, claiming the price was unfair and asking for $6bn in compensation. “The Lawsuit comprises a requirement to sue Gazprom for the prepayment regime on gas that the Russian monopolist has supplied to Ukraine’s Naftogaz since 2010,” the company said in a statement.

Gazprom likewise said it had filed a lawsuit at the Stockholm arbitration court to try to recover the $4.5bn debt it claims Ukraine owes it.