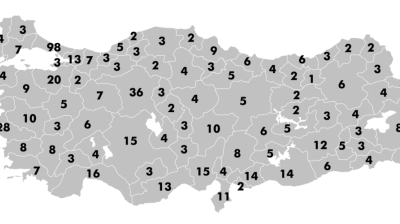 The distribution of MPs in Turkey. Fifty more seats will be awarded by this election than the previous contest following constitutional changes approved by last year's referendum.
By bne IntelliNews June 22, 2018

This weekend’s June 24 elections in Turkey are likely to be the tightest in the country in many years but the odds are nevertheless in favour of President Recep Tayyip Erdogan and his Justice and Development Party (AKP) holding on to power despite the financial market turmoil, Capital Economics said on June 21.

Latest polls indicate that Erdogan will struggle to secure a first-round victory in the presidential contest but should at least triumph in a second-round run-off that would be held on July 8, while the Nation Alliance of opposition parties may fall just short of denying the AKP and nationalist MHP’s People’s Alliance a parliamentary majority.

Whether or not the pro-Kurdish People's Democratic Party (HDP) led by jailed candidate Selahattin Demirtas crosses the 10%-of-votes threshold to achieve parliamentary representation is touch and go. If it does, then the arithmetic will deny the People’s Alliance scores of seats that would almost certainly mean it losing control of parliament. Protecting the HDP vote from any foul play is a big concern of the opposition and monitors who plan to send more than half a million monitors and volunteers to voting sites across the country during the June 24 presidential and parliamentary elections.

Looking at how the markets would respond to an Erdogan/AKP triumph, Jason Tuvey, senior emerging markets economist at Capital Economics, said: “Previous victories for Mr. Erdogan and his party have been welcomed by the markets as a sign of political stability. But this time around, investors’ jitters about the direction of policy under President Erdogan suggest the market reaction is likely to be more cautious. Even an opposition victory might not receive a positive reaction from markets as a period of political uncertainty trumps hopes of a shift towards more orthodox policymaking.”

He added: “The election, and the strengthened position of the president that will come into effect after the vote [because of approved constitutional changes that, for instance, will abolish the post of prime minister and weaken parliament’s role], are unlikely to significantly alter that outlook for the Turkish economy over the next 12-18 months. The recent financial market turmoil means that a sharp slowdown is on the cards.”

Longer term risk of loose policy
The risks stemming from the elections, said Tuvey, are more likely to materialise over the longer term—in particular, the risk that an Erdogan-AKP government pursues much looser fiscal and monetary policy.

“This would result in a continued build up of vulnerabilities in the Turkish economy and set the backdrop for higher inflation and a more volatile (and weaker) growth path. The market implications of this would be steeper falls in the lira and higher local currency bond yields,” he concluded.

Some commentators, such as Nobel Prize-winning economist Paul Krugman, have already described economic events in Turkey of late as a “classic currency-and-debt crisis, of a kind we’ve seen many times in Asia and Latin America”.

In his latest analysis of the elections, Timothy Ash, senior emerging markets economist at BlueBay Asset Management, on June 22 said: “Cohabitation seems most likely at this stage, with the opposition winning the parliament and Erdogan winning the presidency.”

Ash posed the question of whether Turkey might have reached “peak bearishness”, with the market possibly about to turn.

He added: “An opposition clean sweep likely would be well received by the market—assuming that this will see a re-orientation back westwards and towards an EU reform agenda. The assumption then is that we will again see orthodox appointments to key positions of state economy positions.”

Checks and balances
“Arguably a concern for the market now,” said Ash, “would be an AKP/Erdogan clean sweep, with enforcement of the Executive Presidency [ushered in by the elections following already approved constitutional changes], with few checks and balances resulting in poor policy choices—but I guess even here what we have learned over the past few weeks, is that the market is still a key disciplining force on Erdogan. Herein, in the end, with the market penalising the [central bank] for its unorthodox stance, Erdogan was forced to concede to 500bps in rate hikes. So when push comes to shove, Erdogan does eventually respond—he understands his constituency does care about the exchange rate and macro financial stability, in the end. Read my lips here—Erdogan allowed policy rates to be hiked by 500bps, during an election campaign, so surely he would be more willing to accept rebalancing post-election.”

It is important to note, said Ash, that during his 16 years in power, Erdogan has above all shown pragmatism where needed to survive in office—albeit in the economy field this has too often been too late, he noted. “But I think if push came to shove he would allow rates to be hiked further and would accept an IMF programme for Turkey.”

Despite the recent downgrades suffered by Turkey’s banks, Ash also concluded that Turkey’s banking sector is still reasonably strong. “One quarter of the sector is foreign owed, and another quarter state owned. Private sector banks appeared cautious in the run up to this year, moderating balance sheet expansion—NPLs will rise but from low levels and capital buffers still remain strong. State owned banks have been more adventurous and risk tolerant in expanding their balance sheets, but state support seems cast iron—both in ability/willingness to support state owned banks,” he said.

Germany is in discussions with Ankara on reviewing coronavirus (COVID-19) travel restrictions that currently warn German citizens against taking holidays in Turkey but is waiting for European Union ... more

The German government from June plans to lift a tourist travel warning applied to 31 European countries, but Turkey is not among them, according to German media. In addition to Germany's 26 ... more