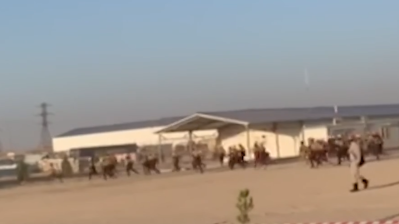 Workers seen running towards the company building that was ransacked.
By Alisher Kalandarov in Tashkent October 23, 2020

Thousands of Uzbek construction workers who ransacked administrative building offices, smashing up furniture and destroying computers in a riot over back wages owed by Enter Engineering, have reportedly started receiving the owed pay.

According to Uzbekistan’s energy ministry, the riots started on the evening of October 20 after growing anger and frustration among the workers spilled over when a malfunction meant it became impossible to open a massive electronically locked door to the cafeteria at the work site in Guzor, a district in the southeastern region of Qashqadaryo.

A worker told RFE/RL on October 22 that, besides overdue salaries and food issues, one of the main reasons for the storming of the administrative building was quarantine restrictions that postponed regular workers' shifts. That forced them to stay at the facility's construction site for long periods without seeing their families. The news service also reported workers as saying that Enter Engineering had begun paying the back wages for work at the site where a multi-billion-dollar gas-to-liquid (GTL) fuels facility is under construction.

Uzbek media outlets reported complaints from workers that they had not been paid for as long as three months.

The spokesperson of the Uzbek Prosecutor-General Hayot Shamsutdinov said the situation at the work site had been brought under control and was being investigated.

Some workers from the site told RFE/RL that Uzbek National Guard, security troops, and police were brought in to break up the riot.

Information about casualties was not made public.

When operational, the GTL plant will in its first phase produce synthetic liquid fuel before in later phases expanding into production of aviation kersone, diesel, naphtha and liquefied gas.